Today for National Hispanic Heritage Month we celebrate the accomplishments of famed chemist Mario Molina whose research on chlorofluorocarbon gases (CFCs) lead to the ban of those compounds in many countries; this research also lead to him being awarded the Nobel Prize in Chemistry in 1995. Molina is currently a climate policy adviser to the President of Mexico, Enrique Peña Nieto. 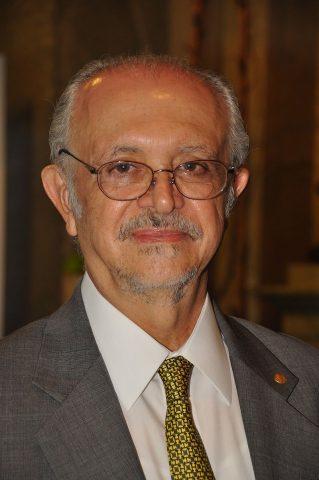 Molina is the son of Roberto Molina-Pasquel, a lawyer and judge who went on to serve as chief Ambassador to Ethiopia, Australia and the Philippines in 1923,[7] and Leonor Henríquez. As a child he converted a bathroom into his own little laboratory, using toy microscopes and chemistry sets. He also looked up to his aunt Esther Molina, who was a chemist, and who helped him with his experiments.[8]

After completing his basic studies in Mexico City and at the Institut auf dem Rosenberg in Switzerland[7][9] he earned a bachelor’s degree in chemical engineering at the National Autonomous University of Mexico (UNAM) in 1965. Two years later he earned his postgraduate degree at the Albert Ludwigs University of Freiburg, West Germany, and a Ph.D. in chemistry at the University of California, Berkeley in 1972. Molina married chemist Luisa Y. Tan in July 1973. They moved to Irvine, California that fall.

In 1974, as a postdoctoral researcher at University of California, Irvine, he and Rowland co-authored a paper in the journal Nature highlighting the threat of CFCs to the ozone layer in the stratosphere.[10] At the time, CFCs were widely used as chemical propellants and refrigerants. Initial indifference from the academic community prompted the pair to hold a press conference at a meeting of the American Chemical Society in Atlantic City in September 1974, in which they called for a complete ban on further releases of CFCs into the atmosphere. Skepticism from scientists and commercial manufacturers persisted, however, and a consensus on the need for action only began to emerge in 1976 with the publication of a review of the science by the National Academy of Sciences. This led to moves towards the worldwide elimination of CFCs from aerosol cans and refrigerators, and it is for this work that Molina later shared the Nobel Prize in Chemistry.