How to hack LEDs into Lego minifigures for Halloween 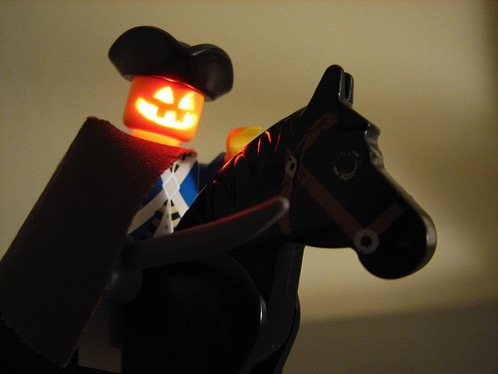 In what seems like a miraculous coincidence, a standard LED fits exactly into the head of a Lego minifigure. It’s that easy: grab an LED and a head, slip it in, and it fits perfectly.

The modern Lego minifigure dates to 1975-8. Since LEDs were already coming in 5 mm packages (also called T 1 3/4 packages) by the mid 1970’s, it’s clear that Lego minifigures were made to fit LEDs in their heads. It’s a sign from above: The little yellow guys are simply meant to have light-up noggins. Who are we to argue with fate?

It’s a good idea to carve your head before putting the LED in. (No, not your head, the head of your Lego minifigure.) This is particularly important if you’re starting with an older Lego head, since the suction can make it hard to remove the LED. (Newer Lego minifigure heads have a vent in the top.)

If necessary, wipe the smile (and eyes) off of its face with some rubbing alcohol. To carve the face, use a hobby knife with a sharp blade. You will be tempted to work with the knife very close to your face, so that you can see what you’re doing. That’s fine, but it’s a very good idea to wear some eye protection. Once you’re done carving, use the knife to remove any burrs or chips on the inside, which could make it difficult to insert the LED. 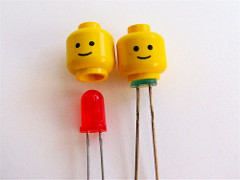