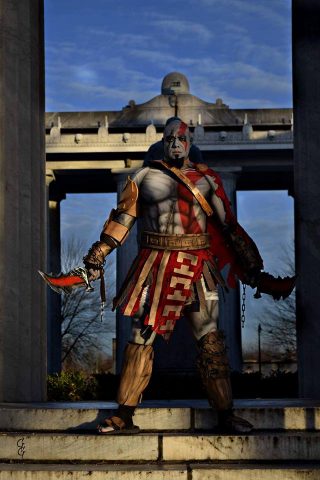 For some, an appreciation for cosplay starts with Halloween. That’s what happened with Knightmage. I asked the prolific cosplayer about his origins, organization tips, and the materials he likes best in this interview:

Adafruit: What inspired you to start cosplaying and what was the first costume you made?

Knightmage: It all started when I decided to make a Halloween costume in 2011. I’ve always loved to dress up for Halloween. This time I wanted to make my own costume. I chose The Green Lantern John Stewart. I chose that character not just because I liked him but because the design seemed simple enough to do. I knew of cosplaying but I had no idea how big that world really was. Believe it or not I had never been to a convention before. Once I made that costume I started doing a few local charity events which led me into creating my second costume then third and so on. A few well known cosplayers took notice of me online and started asking what conventions I attend. Well, again I had never been to one. I finally attended my first convention, Cincinnati Comic Expo in the fall of 2012. I’ve been addicted ever since, obviously. The inspiration I now have to continue is a combination of finding out my creative side and wanted to explore more of that along with knowing I can use it to give back in a positive way. It’s a complete win-win.

Adafruit: Since that first cosplay, what do you think has been the most valuable/helpful skill you’ve learned?

Knightmage: Oh wow. I’ve learned so many that have been extremely helpful. Sewing, painting, makeup, working with foam and thermoplastics. This is a tough question but I think being able to think outside the box has been the most useful. One thing I’m really big on is that it doesn’t need to be expensive to be awesome. Sometimes all it takes is looking at items in different ways– such as cake icing tips as spikes or googly eyes for rivets. There’s no one way or better yet, no correct way to cosplay. The only limit is what your own imagination and creativity allows. 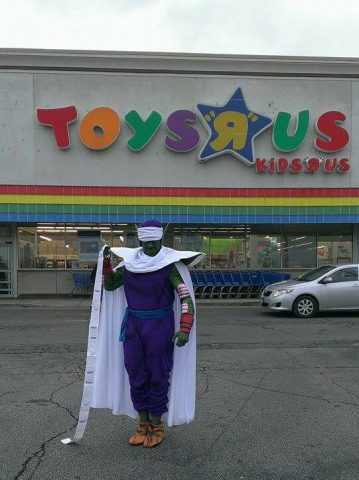 Adafruit: Your cosplay portfolio includes a variety of characters – including several from comic books. What goes into determining who you’ll cosplay next?

Knightmage: Honestly, I don’t even really know the answer to this question. I could be in the shower and a character just pops in my head and I think “Hmmm, that might be fun to do.” And that’s the key for me. I have to feel that it would be fun. If I’m not feeling it then I’m not doing it, there’s no point. Often times my cosplay partner, Superkayce and I will bounce ideas off one another. There have been characters that she’s mentioned such as Panther Lily from the Anime Fairy Tail. I’ve never watched Fairy Tail but the character looked like it would be fun, so I did it. Other times it could be for a specific purpose. Another show I never watched was Dragon Ball Z, however two years ago I was approached by an individual who wanted to pay me a certain amount just so that he could see me create the character of Piccolo. I thought about it and agreed to create the character and also match his contribution which I then went to my local Toys R Us during Christmas time dressed as Piccolo and paid off layaways. While the character of Piccolo maybe wasn’t “fun” to me, the act of what I could do with it more than made up for it. So being able to have fun with the character whether creating them or using it for a specific reason determines what I’ll cosplay next. So nothing is completely off the table for me. 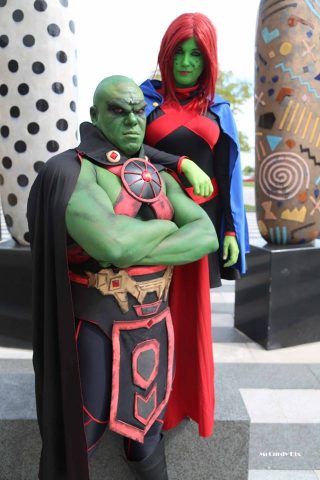 Adafruit: Of your many costumes, which was the most challenging to build so far and why? How did you overcome that challenge?

Knightmage: My next costume is always my most challenging. Again, the thing with me is that I do things on a strict budget and quickly. If I can’t make it or figure it out for less than $250, then I’m not doing it. Also on average a costume takes me about 4 days to complete. The reason it’s challenging is because I don’t go into creating costumes with a plan. I just start and work through it. I’m not one to do “accurate” designs. The way I see it is that I want to create characters in my own vision. If I really had to pick one costume that I was most worried about it would be Predator. I believe that was my fault though because I psyched myself out. Many people who cosplay as Predator take it and their builds seriously, sometimes spending thousands of dollars on them. I let that get to me and for a moment wasn’t thinking about it as if it were me doing it. Like every other build once I started I caught my groove. When it was said and done, 4 days and $125 later my Predator was done. The defining moment for me with that cosplay is when I was approached by “MAN AT ARMS: Reforged” which is a very popular YouTube show where they recreate iconic movie, comic book and cartoon weapons for real using real metal. They saw my Predator and wanted me for their episode where they made the Predator wrist blades. I had a blast. I constantly use that costume to show others that you can if you want to but you don’t need to spend hundreds of thousands of dollars for a great costume. So the one that worried me the most turned out to be the one I’m most proud of……for now.

Adafruit: What is a material you can’t live without and how have you used it in your costumes?

Knightmage: Another really difficult question but I’ll have to say hot glue. I use hot glue on everything. If I don’t feel like sewing I’ll hot glue it together. I use it for texture, I’ve used it for webs and veins. There are other glues out there but hot glue is my go to and something I constantly use. Other than that, I would say foam for making armor and other props. 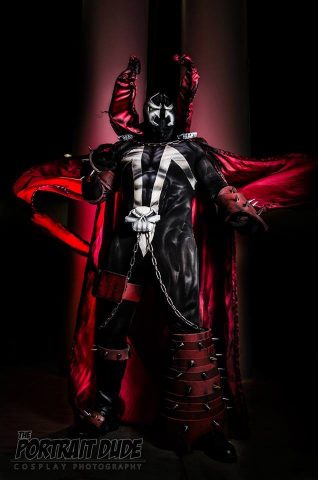 Spawn, photo by The Portrait Dude

Adafruit: Since you have constructed so many costumes: How do you store everything? Do you have tips for cosplayers who want to get more organized?

Knightmage: Mainly totes from Walmart. My second bedroom quickly filled up with totes. I now have over 75 costumes so it was getting crazy pretty fast. I now moved over into getting a climate controlled storage unit. It’s a 10×10 space. Some totes have multiple costumes in them depending on the size of the pieces. All my boots and shoes are in their own totes as well as general weapons and accessories that I use for multiple costumes. I also converted an industrial 6000lb hold strength shelving unit into a clothes rack. My advice is to just try and stay as organized as possible with not taking up unnecessary room. Double costumes up in totes and hang your clothing if possible. Try and keep things that you use for multiple costumes all together as well. And of course make sure your totes are properly labeled.

Keep up with all of Knightmage’s projects by following him on Facebook.

Comments Off on Cosplay Interview with Knightmage