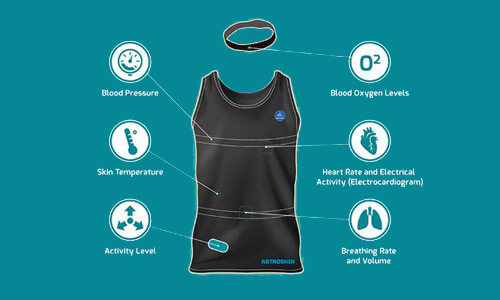 A ‘smart shirt’ designed to remotely monitor the wearer’s health via a series of sensors is set to be tested in space in an upcoming mission by the Canadian Space Agency (CSA).
It has signed a $2.4m deal with Carré Technologies that will see the wearable sensors developer’s bio-monitoring system taken aboard the International Space Station (ISS) by Canadian astronaut David Saint-Jacques during a six-month mission in 2018-2019.
The wearable tech – called Astroskin – collects scientific data on activity levels, sleep quality and vital signs, including blood oxygen levels, blood pressure, heart rate and electrical activity, and breathing rate.
Pierre-Alexandre Fournier, co-founder and chief executive of Carré Technologies, said: “Deploying our wearable sensors and software to the ISS is significant as this represents the ultimate remote patient monitoring scenario.

Comments Off on Astronauts to trial healthcare wearables in space #WearableWednesday