How to Make The Force Awakens’ Rey’s Arm Warmers 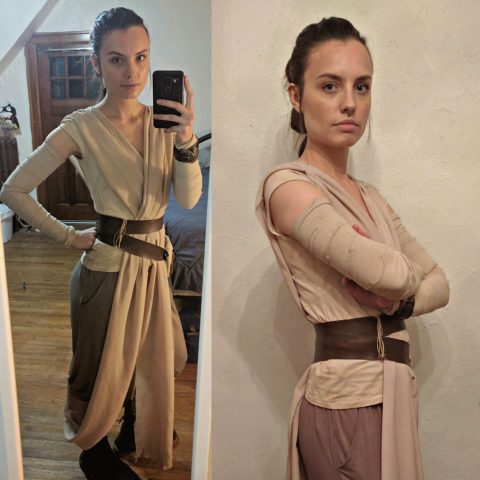 Redditor catleesi doesn’t go to conventions or have much of a chance to cosplay, so she goes all out for Halloween. This year she dressed as Rey from The Force Awakens. She chose the scavenger ensemble the character wears throughout most of the film — it looks like the most comfortable outfit ever. And I imagine comfort is important when you live in a tough environment like Jakku.

The costume looks pretty straightforward, but arm warmers can be tricky. You have to use the right material and/or elastic to get them to stay in place without double-sided tape. You don’t want them to slouch. Catleesi explained how she made hers:

To make the wraps I cut the fabric up into four, long 2.5 inch-ish thick strips, then sewed each pair of strips together end to end to get two wraps long enough to cover my arms. On one end of each wrap I sewed a loop a bit smaller than the circumference of my upper arm so I could pull it up my arm and it would fit quite snugly (the fabric was a bit stretchy). Then, using the loops as kind of a starting point I wrapped the fabric down each of my arms really tightly and tucked in the ends. I just made sure to wrap it in a way that covered the initial loop and the seam between the fabric strips. Once I got good enough at wrapping them tightly, they didn’t really ever fall down.
Also I attempted to make them look dirtier with tea but you can’t really tell all that much.
Hopefully that makes some amount of sense!