A new edition of Adafruit’s comic reading list! This week it’s Prez by Mark Russell and Ben Caldwell, written up by Zay from Community Support!

The original Prez by Joe Simon and Jerry Grandenetti came along in the 70s, when comics tried out a spate of characters for youth culture. In that comic, teenager Master Rickard is conned into running for office by the evil Mr. Smiley, a Tammany hall type who’s using a youth culture hook to gain power.

Into the picture steps Eagle Free, a terribly dated and stereotypical Native American who reveals to Rickard Mr. Smiley’s machinations. Riding a wave of success, Rickard is soon elected President on the strength of the Flower Power Ticket, whose slogan is, for real: A chicken in every pot, weed for all, and somebody to sign the petitions.” 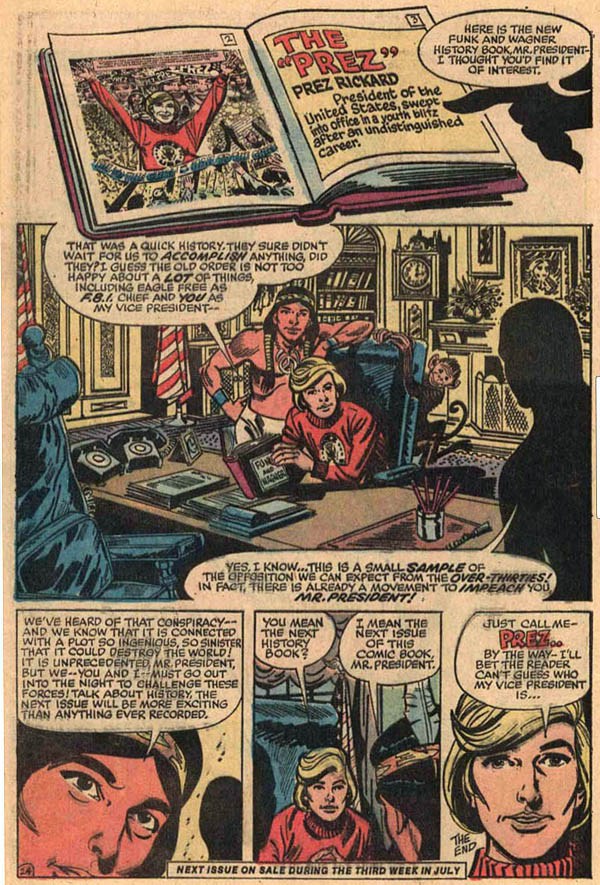 Those original Prez stories feel pretty dated and dusty — as if Joe Simon had the Mr. Smiley role in creating a cute young president wise to the ways of America’s original inhabitants.

But like many almost-forgotten characters from the 70s, Prez was reimagined by rescued by an English writer. The Golden Boy story from Neil Gaiman’s The Sandman in the World’s End arc tells the tale of an older Prez in a darker America, still turning tragedy into a particularly American kind of honor. Even when he’s out of power and in the afterlife, Prez ends up searching the dreams of alternate worlds, looking for a new America to save. 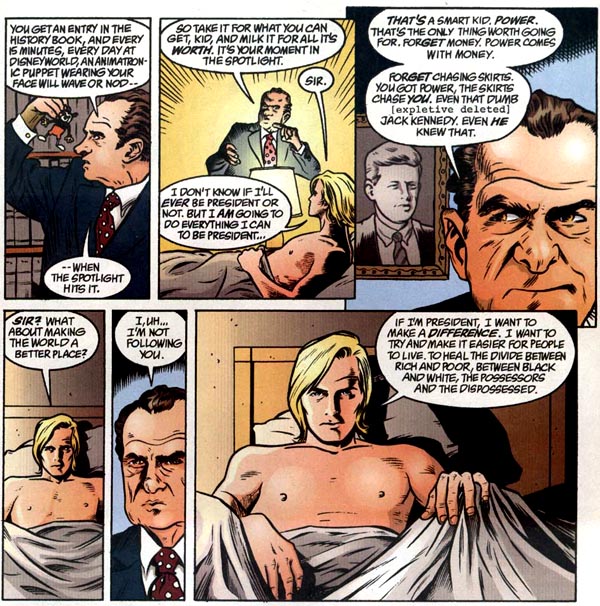 That was then. This is now. And Mark Russell of God is Disappointed in You answered DC’s call to write a new version of Prez for the 2016 election. And what did Mark do? He made Prez a teenage girl with a punk cut named Beth Ross. 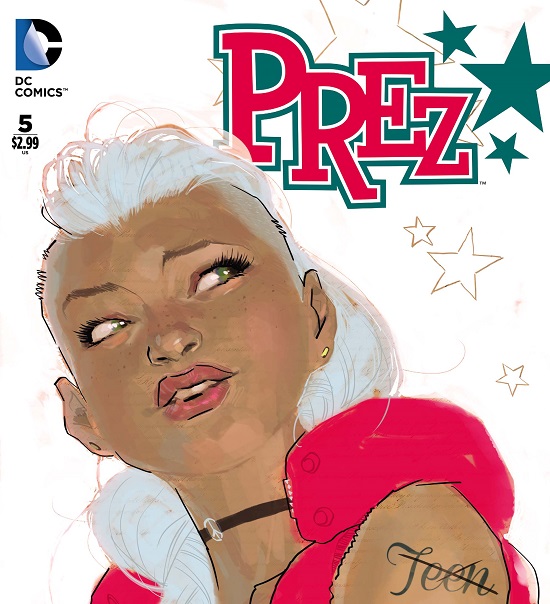 Russell’s version of the Prez is set in an imagined 2030 where the Tea Party had come into power and spent 20 years implementing its policies on a pliable America driven by image and capital. It’s a world where food stamp programs have been privatized and turned into TacoDrone, which delivers tacos via drone right into the homes of those in need — it also collects information on its customers that can be sold to the government or other companies. (So you know, it’s barely fiction.) 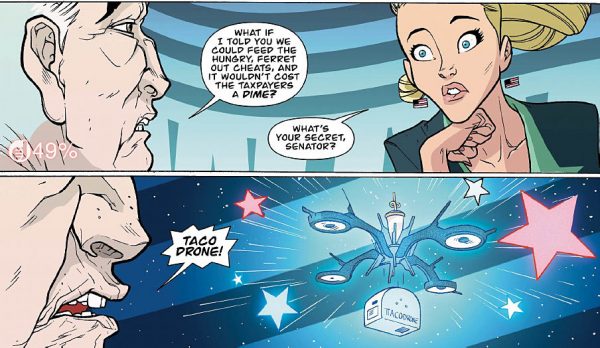 Beth brings to the presidency not the adventurous derring-do of Prez Rickard, but something far more revolutionary in our world: optimism. And when she’s accused of being too young or naive to make the kinds of decisions she’s trying to make, she proves her self-awareness with humility and a one-liner. 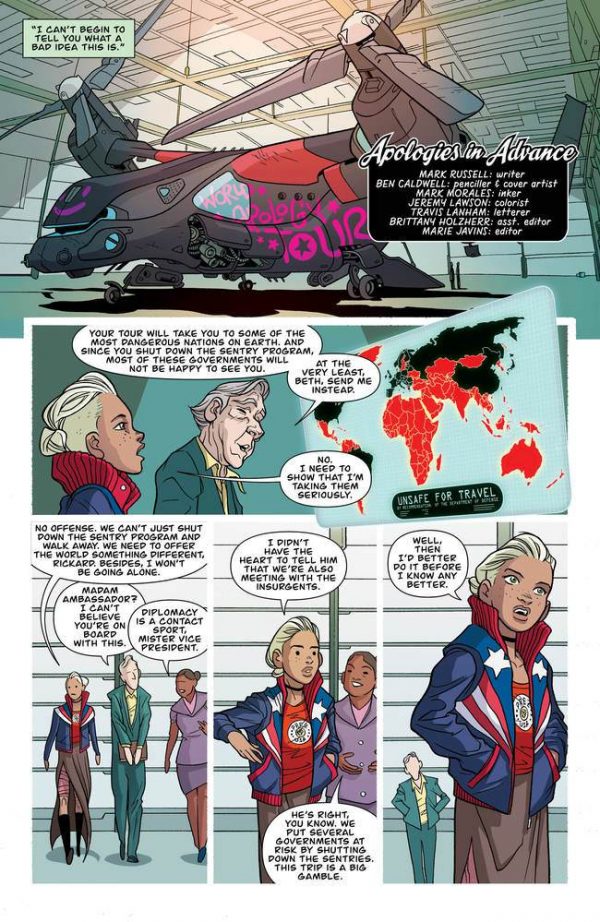 What Joe Simon did, seemingly, to capitalize on youth culture, and Neil Gaiman did as a compassionate English intellectual’s attempt to find the soul of American kindness, Mark Russell seems to be trying to play satire and earnest hope in equal measure. That’s a tough combination, but could be  which solid prescription for today’s political landscape. 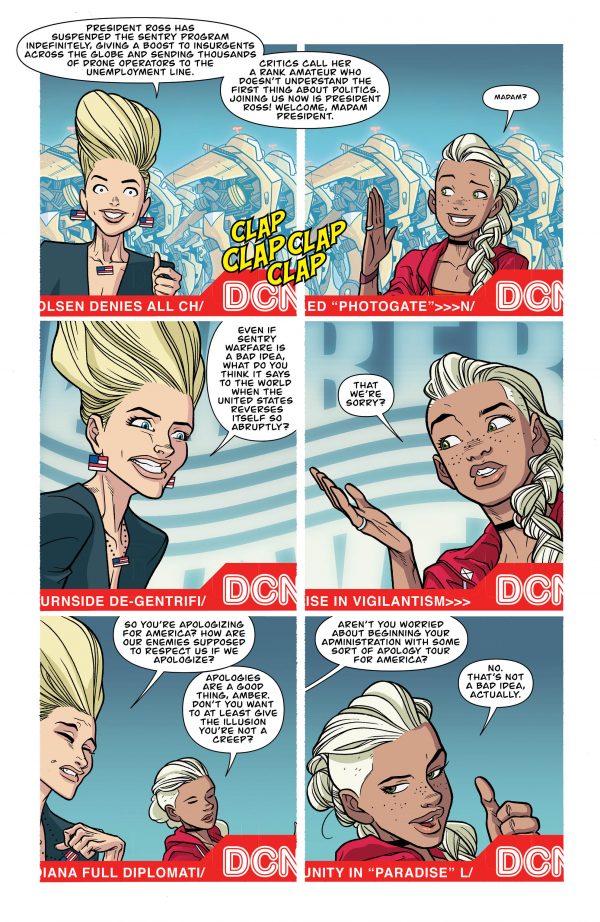 It’s funny, it’s smart, and it might be just the right read right now.