On Anniversary of the Patriot Act, Artist Passes Out Pocket Knives at the Airport #ArtTuesday 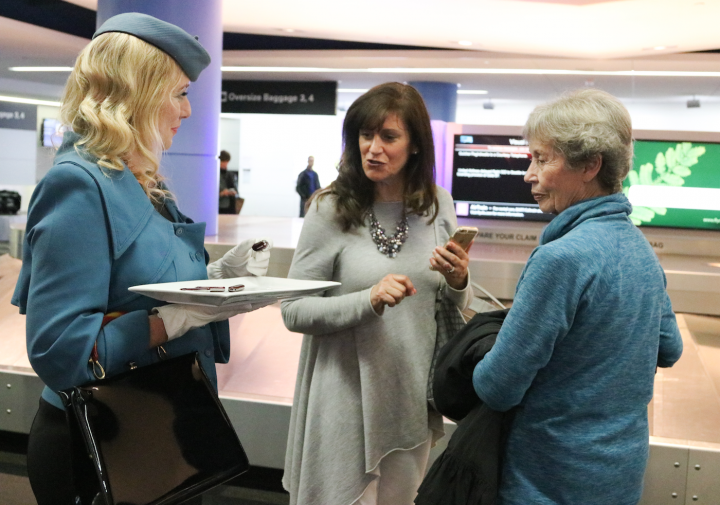 Last Wednesday, some travelers flying into San Francisco’s International Airport had an odd encounter while waiting at baggage claim. They were greeted by conceptual artist Michele Pred, who handed them small pocket knives to keep, each emblazoned with the words, “Official Air Travel Replacement Knife.” Her gift was part of her performance marking the 15th anniversary of September 11 and the passage of the contentious Patriot Act, which led to the federalization and tightening of airport screening processes.

Dressed as a 1960s-era flight attendant (complete with an original hat worn by Pan Am stewardesses — one of whom was her mother), Pred returned to travelers one of the most commonly confiscated items in airport security lines. The performance was, of course, sanctioned: she had received permission from the airport, obtaining a Free Speech and Expressive Activities Permit after a long application process. She specifically chose the two and a quarter-inch red knives as they are the most common of all those that TSA officers seize. To her, though small, the utilitarian object and the response its presence provokes at airports speak volumes about security culture.

“The text that I had printed on them was intended as a somewhat humorous way of driving home the notion that our focus on security has not only taken things away from us, but has not clearly explained what it has given back,” Pred told Hyperallergic.

She handed out 50 knives at the airport, although she had to approach many more people, as about half the travelers she attempted to gift knives to either refused to accept them or even engage with her. Many of those who did, she said, shared with her stories of the objects that they have had confiscated — many of them pocket knives. 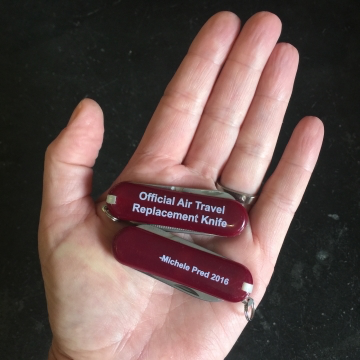 Comments Off on On Anniversary of the Patriot Act, Artist Passes Out Pocket Knives at the Airport #ArtTuesday