Ella Cara Deloria is known for her linguistic and ethnographic work within the Sioux Nation. 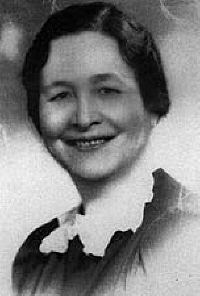 From Women’s Intellectual Contributions to the Study of Mind and Society:

In 1915, Deloria received her bachelors from Columbia Teacher’s College. While at Columbia, Ella met and worked with Franz Boas, a highly regarded anthropologist, to work as a translator of Dakota Sioux texts (DeMallie, 1988). It was thought this early exposure that Deloria came to the field of anthology. Deloria’s work with Boas brought her first paying job – $18.00 a month (DeMallie, 1988). Deloria and Boas enjoyed a length working relationship. He often contacted her to translate and analysis texts. In 1926, Boas arranged for Deloria to come to New York to begin further collaborations (DeMallie, 1988). It was in New York that Deloria came to know Ruth Benedict.

Benedict and Deloria began correspondence that would last until Benedict’s death. Much of the letters between Deloria and Benedict were not opened until 1998 (Gardner, 2000), and as such are not widely as recognized as the Boas connection. It was Benedict’s advice that Deloria focus on kinship, tribal structure, and the role of women, that later emerged as a novel and accompanying text that would shape Deloria’s work (Biography Resource Center). In her efforts to research traditional culture of the Lakota and Dakota Sioux, Deloria interviewed elders and tribal historians. Many of her interviews are the last remaining accounts of aspects of the culture. These interviews were largely in danger of being lost, until recent efforts began to catalog them (Gardner, 2000) Biography Resource Center.