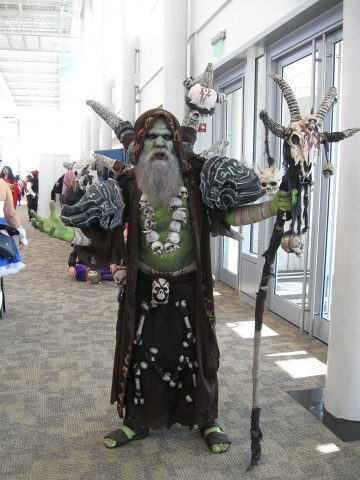 I know I just said this recently, but I’m impressed when cosplayers get ambitious with their first builds. Redditor Felbeef decided to become (just superficially as far as I know) the World of Warcraft character Gul’dan, Lord of the Shadow Council, for Neko. The event was only his third convention, and he was convinced by a friend to wear his Gul’dan ensemble there. He did a terrific job crafting the props. For the spikes and staff, he got resourceful. He said:

i used a towel and rolled it up to make a large cone shape (corner to corner ish) and then i wrapped it with packaging tape. As i was wrapping i bent it into the shape i wanted. i then cut it off and removed the towel and tapped it back up, filled it with insulation foam, and then covered the exterior with paper clay that i textured with a fork. The staff has similar smaller horns and lots of customized skull things i found around town during halloween

Comments Off on World of Warcraft Gul’dan Costume