The 2016 IEEE International Conference on Humanoid Robots kicks off today. It’s taking place at the Westin Resort & Spa Cancun, which sounds awful, but at least there are some cool new robots, and one of the coolest has to be BALLU, from Dennis Hong at UCLA’s Robotics & Mechanisms Laboratory (RoMeLa). BALLU, or Buoyancy Assisted Lightweight Legged Unit (Professor Hong loves a good acronym), is a humanoid-ish robot with a body made of helium balloons and a pair of thin articulated legs. Since it weighs next to nothing, it never falls over, and can walk, hop, and perform a variety of other useful bipedal motions as long as you don’t take it outside on a windy day.

“To get creative ideas, sometimes we ask ourselves crazy, ridiculous questions,” Hong told us. “Oftentimes these lead to crazy, ridiculous answers, which lead to ingenious ideas.” He added: “We asked ourselves, ‘What if we could change the direction of gravity?’ and this led to the concept of BALLU.”

Strictly speaking, BALLU is more like a hybrid airship than a blimp: It’s not lighter than air, so it doesn’t float by itself, and requires some assistance (legs, in this case) for support and to control its motion. Since the robot’s legs don’t have to handle a bunch of weight, they can be skinny little twiggy things, and in fact there’s just one single degree of freedom per leg, in the knee. The knees are cable driven, with the actuators in BALLU’s feet, along with communications and power components. This results in a robot that has the majority of its mass at ground level, making it intrinsically stable, even as it walks forward, walks backward, steps sideways, turns, hops, and more. When we say “mass” we’re not talking about much: As you can see in the video, BALLU can walk on water. 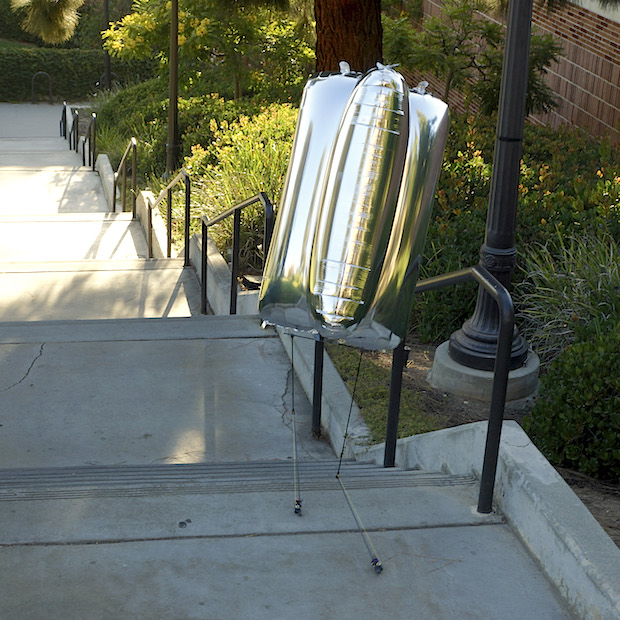 Comments Off on Humanoid Balloon robot can’t fall over #robotics