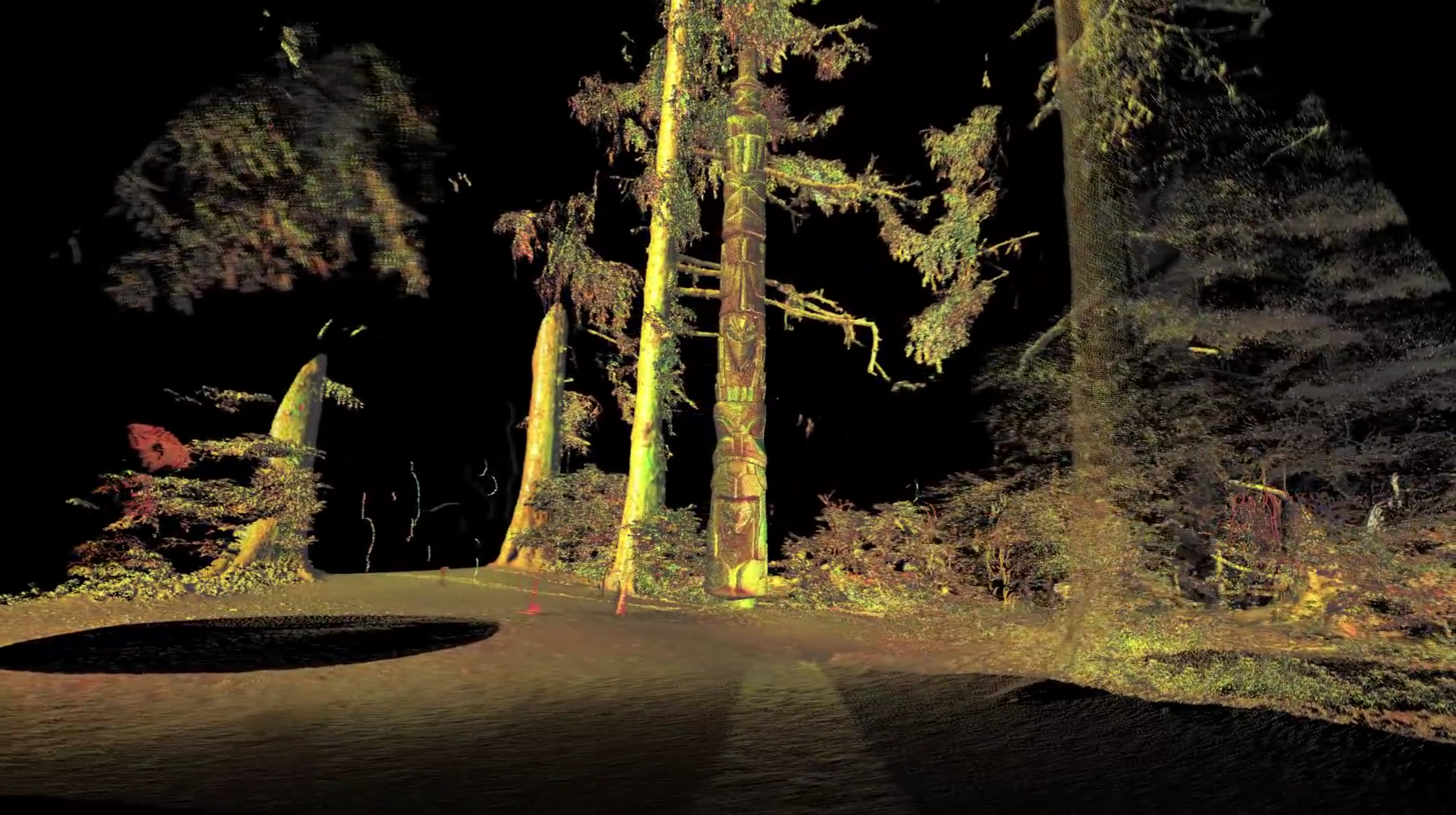 The Sitka National Historic Park is a remote gem on Baranof Island, one of the larger islands in the Sealaska region in the southeast section of the state, bordering Canada’s British Columbia and looking out into the Sitka Sound, the Gulf of Alaska, and the Northern Pacific Ocean. It’s a beautiful place that I’ve never been to and might not ever get to. However the technology of today (laser imaging, high-res photo stitching, and more) makes it possible to take something of a trip there, specifically to explore artifacts and environments in that park’s Totem Trail: the virtual tour is here and an interactive map of the park can be found here. 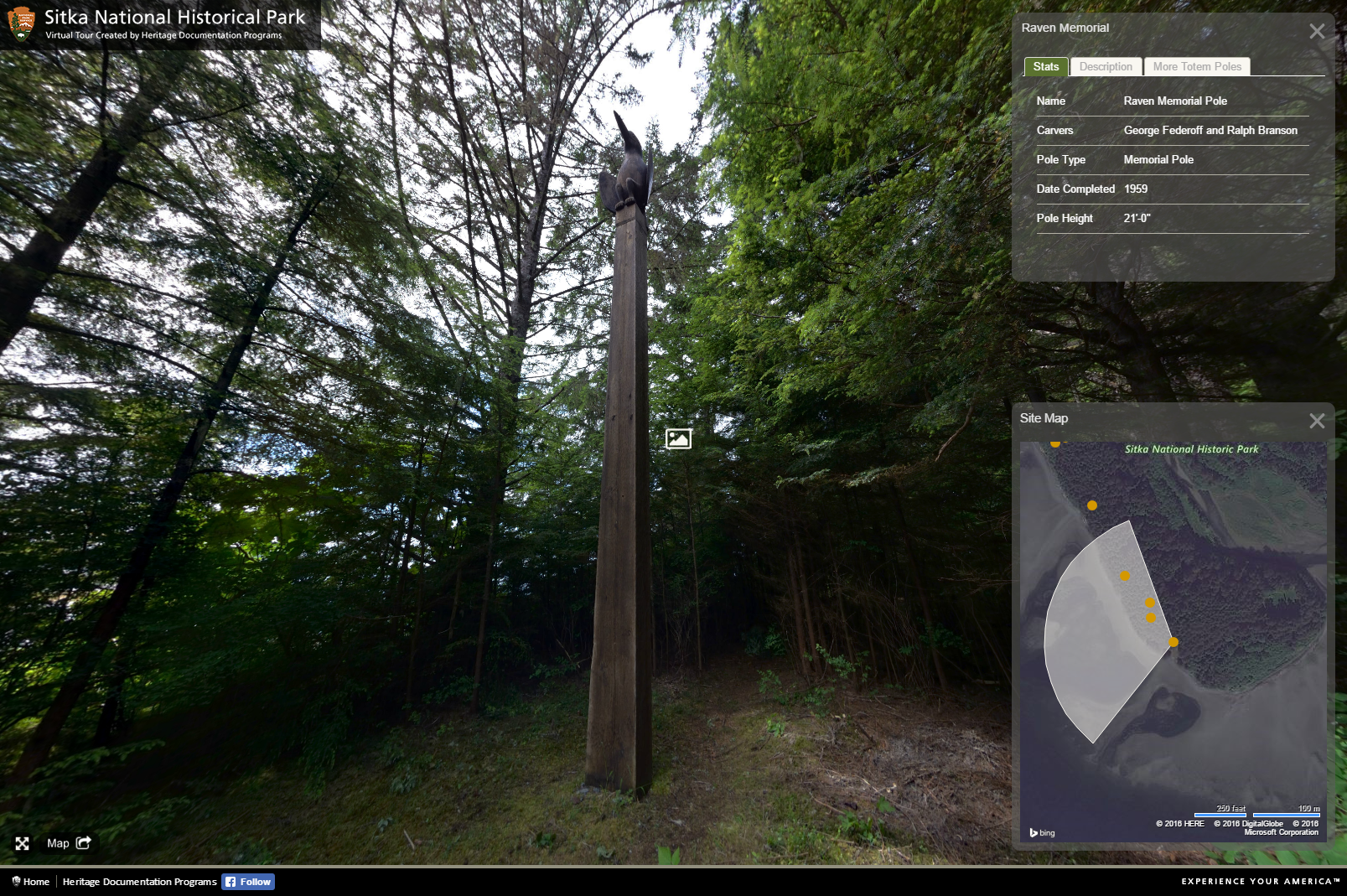 Beginning in 1903, Alaska district governor John Brady, based in the territorial capital of Sitka, assembled a remarkable collection of totem poles. The poles were brought to Sitka from various locations along the southeast Alaska coast, gifts from native Tlingit and Haida chiefs. In 1904 the poles were shipped to St. Louis, for display outside the Alaska pavilion at the Louisiana Purchase Exposition. The poles were then displayed at the 1905 Louis and Clark Exposition in Portland, Oregon, before finally returning to Sitka, where they were installed along a trail through the federal park which had been created in 1890 to commemorate the 1804 battle between the Tlingit and the Russians.

Jurisdiction for the totem poles passed to the National Park Service in 1916, with the establishment of Sitka National Historical Park. Over the years, as the poles deteriorated, they were repaired, or even completely recarved, with a major effort undertaken by the Civilian Conservation Corps in the 1930s. In 1969 the park established the Southeast Alaska Indian Cultural Center, which has overseen the repair and recarving of the existing poles, as well as the carving of several new poles.

In 2013 a joint project was undertaken by the National Park Service’s Harpers Ferry Center, by Sitka National Historical Park, and by the Historic American Landscapes Survey to document the 19 standing totem poles and house posts along the totem Trail, in order to enhance the park’s interpretive efforts. Heritage Documentation Programs architects Jeremy Mauro and Mark Schara scanned each of the poles with a Leica Scanstation C10 3-d laser scanner, with the resulting point clouds subsequently rendered with applied panophotographs. The fly-through animation was executed in Pointools. In addition, orthogonal still images of the rendered point clouds will by used by the Harpers Ferry Center in the design of new interpretive wayside signs for the park.

This video contains no spoken word. 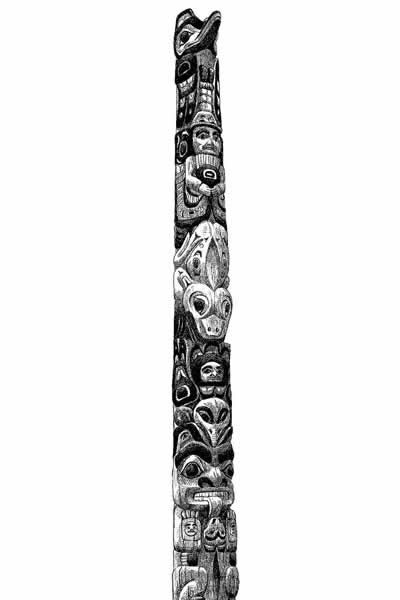