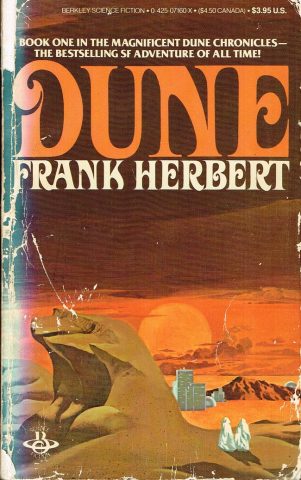 Frank Herbert’s Dune is a sci-fi classic. The world he created has depth and scope, and we’ve seen it brought to screen a couple of times — once in a film from the early ’80s and once with a miniseries on Sci-Fi (now Syfy). But it might be time for another adaptation because Legendary Entertainment has acquired both the film and television rights for Dune. That means Legendary and Universal Pictures can develop movie and TV projects inspired by the franchise. The press release specifically mentions the novel Dune but not any of its prequels or sequels, so I’m guessing they’ll stick to the single book. That’s more than okay since the book covers a lot of story. From the release:

Legendary and the Frank Herbert estate have reached an agreement granting the production entity the film and television motion picture rights to the beloved novel DUNE, one of the most revered science fiction novels of all time. The agreement calls for the development and production of possible film and television projects for a global audience. The projects would be produced by Thomas Tull, Mary Parent and Cale Boyter, with Brian Herbert, Byron Merritt and Kim Herbert serving as executive producers.

Given the meat and intense worldbuilding in Dune, I think a TV series would be the way to go. We’d have the time to really get to know Paul, Jessica, and all the characters. And if they wanted to spend some time focusing on groups like Fremen or the Bene Gesserit, a TV show would give them room to do so.

While you digest this news, revisit all of our Dune posts. We have a how-to for crafting a Maker hook, stillsuit info, Dune with gummy worms, and more.