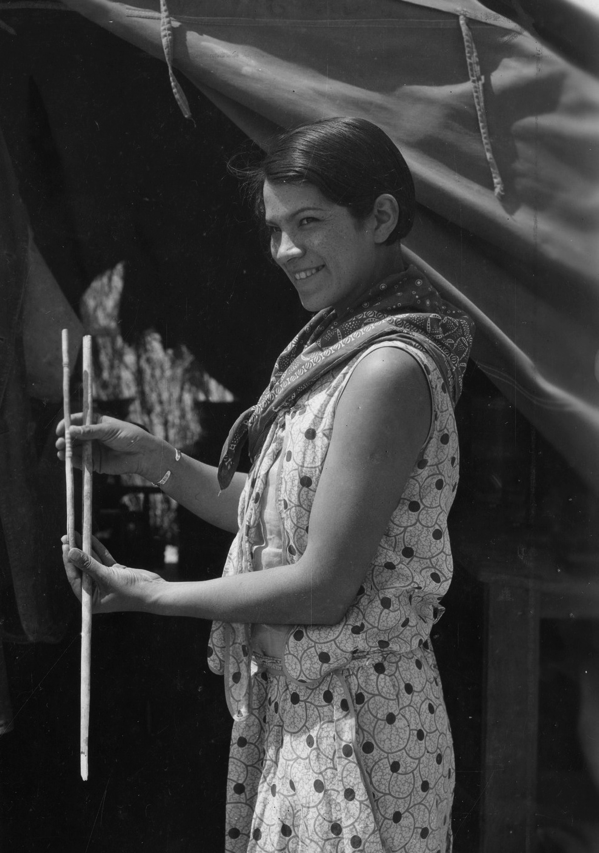 Bertha Parker Pallan was the first Native American woman to become an archaeologist.

Bertha “Birdie” Parker was the first Native American female archaeologist, of Abenaki and Seneca descent. She was born in 1907 in Chautauqua County, New York. Her mother, Beulah Tahamont (later Folsom), was an actress. Her father, Arthur C. Parker, was an archaeologist and the first president of the Society for American Archaeology. Her maternal grandparents were the actors Elijah “Chief Dark Cloud” Tahamont and Margaret (Dove Eye) Camp. As a child, she assisted her father in his excavations…

…Mark Raymond Harrington hired Bertha as a camp cook and expedition secretary. She participated in excavations at the site of Mesa House and other locales, and Harrington taught her archaeological methods in the field. In 1929, she discovered and did a solo excavation at the pueblo site of Scorpion Hill; the finds were exhibited in the Southwest Museum.

Bertha worked at Gypsum Cave in 1930, a site that Harrington promoted as having the earliest evidence for human occupation of North America during the Pleistocene.

As the expedition secretary, Bertha worked at cleaning, repairing, and cataloguing finds; in addition, she explored the rooms of the cave in her spare time and was able to reach into some of the most inaccessible crevices. On one of these occasions she discovered the skull of a species of extinct giant ground sloth, Nothrotherium shastense Sinclair, alongside ancient human tools. Harrington noted that the find was the most important one of the expedition, because it drew the support of additional institutions, notably the California Institute of Technology and later the Carnegie Institution of Washington.

While on this expedition, Bertha also discovered the site of Corn Creek after seeing fossil camel bone protruding from an eroding lake bed.

From 1931 to 1941, Bertha worked as an Assistant in Archaeology and Ethnology at the Southwest Museum. She published a number of archaeological and ethnological papers in the museum journal, Masterkey, from the early 1930s through the 1960s. These included papers such as “California Indian Baby Cradles”, “Kachina Dolls” and several articles on the Yurok Tribe, including “Some Yurok Customs and Beliefs”.

Bertha Parker Pallan Thurston Cody is notable in the field of archaeology for her role as a ground-breaker: she was one of the first (if not the first) Native American female archaeologists. She was certainly first in her ability to conduct this work at a high level of skill, yet without a university education, making discoveries and gaining insights that impressed the trained archaeologists around her.

Comments Off on Bertha Parker Pallan, one of the first Native American female archaeologists #NativeAmericanHeritageMonth