The Woman the Mercury Astronauts Couldn’t Do Without #WomenInSTEM 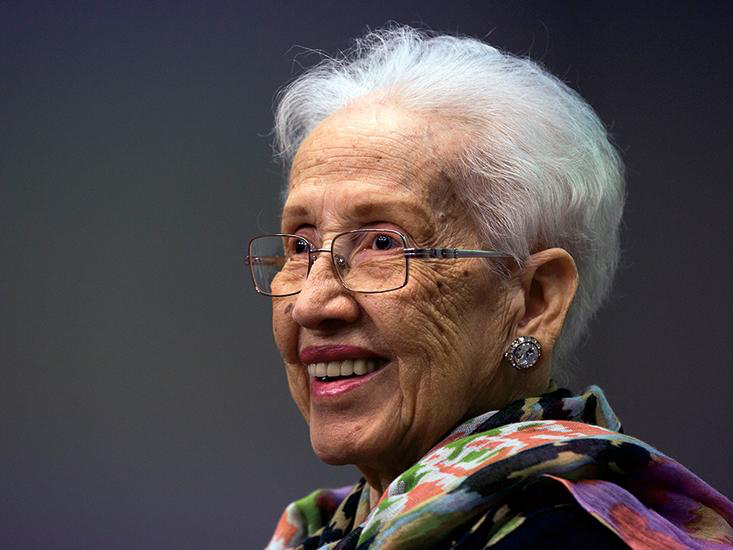 It had always been Katherine Goble’s great talent to be in the right place at the right time. In August 1952, 12 years after leaving graduate school to have her first child, that right place was in Marion, Virginia, at the wedding of her husband, Jimmy Goble’s, little sister Patricia. Pat, a vivacious college beauty queen just two months graduated from Virginia State College, was marrying her college sweetheart, a young army corporal named Walter Kane.

Jimmy’s other sister and brother-in-law, Margaret and Eric Epps, had journeyed from Newport News, and the newlyweds planned to accompany the Eppses back to the coast, hitching a ride to their honeymoon at Hampton’s segregated Bay Shore Beach resort. “Why don’t y’all come home with us too?” Eric asked Katherine. “I can get Snook a job at the shipyard,” he said, using Jimmy’s family nickname. “In fact, I can get both of you jobs.” There’s a government facility in Hampton that’s hiring black women, Eric told Katherine, and they’re looking for mathematicians. It’s a civilian job, he told her, but attached to Langley Memorial Aeronautical Laboratory—the oldest outpost of the National Advisory Committee for Aeronautics, or NACA.

Katherine listened intently as her brother-in-law described the work, her thumb cradling her chin, her index finger extended along her cheek, the signal that she was listening carefully. She and Jimmy made a living as public school teachers, but their paychecks were modest. The needs of their three growing daughters seemed greater by the day, and the couple could only just cover their basics and squeeze out a little extra for piano lessons or Girl Scouts. Deft with a sewing machine, Katherine bought fabric from the dry goods store and stayed up nights making school outfits for the girls and dresses for herself. During the summer break from school, the Gobles worked as live-in help for a New York family that summered in Virginia’s Blue Ridge Mountains.

Katherine enjoyed teaching. She felt a keen sense of responsibility to “advance the race,” instilling not just book knowledge but discipline and self-respect in her students, who would need both of those qualities in abundance to make their way in a society stacked against them in nearly every way. She and Jimmy hewed to the path that was so well-worn that the feet of Negro college graduates like them were trained to walk it almost automatically. But Eric Epps’ mention of the mathematics job in Hampton kindled the memory of a long dormant ambition, one Katherine was surprised to find still smoldering within her.

It was late that night when Katherine and Jimmy tucked the girls into their beds and collapsed onto their own bed. Only after exhausting all the other stories of the wedding did they broach the topic that occupied both of their minds. Taking the road to Newport News would mean making a decision quickly. With the school year approaching, the Bluefield principal would need time to find replacements to take over their classes. They would need a place to live. Uprooting the girls on short order and enrolling them in new schools would be trying for all of them. Hampton Roads was far from Jimmy’s parents, and even farther away from Katherine’s parents in White Sulphur Springs, who doted on their granddaughters. It would have been easy to continue with the stable small-town life they had created. But the possibility of this new job tugged at the curiosity that was at the core of Katherine Goble’s nature.