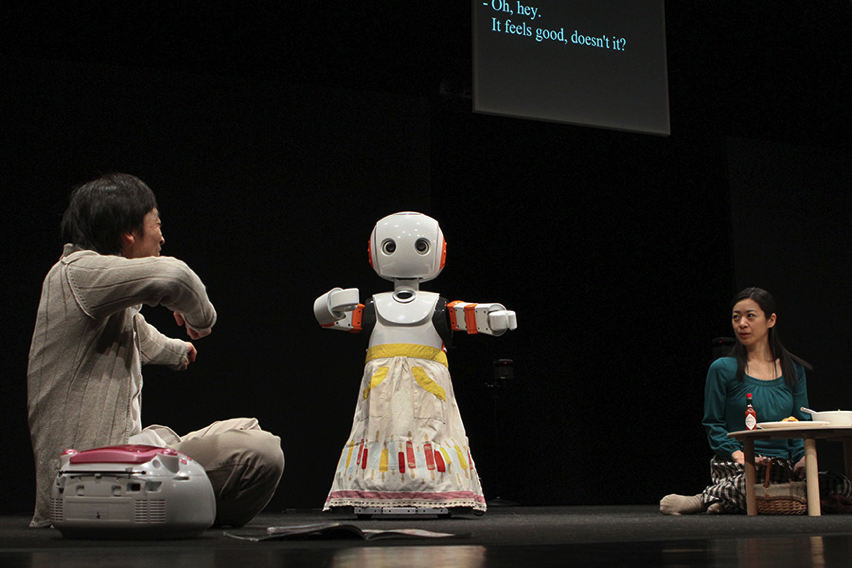 Robohub has an interview with Yi-Wei Keng, artistic director of the Taipei Arts Festival on the intersection between robots and art.

ow can robotics help to enhance the development of the modern arts? Japan’s famous playwright, stage director Oriza Hirata and leading roboticist Hiroshi Ishiguro launched the “Robot Theater Project” at Osaka University to explore the boundary between human-robot interactions through robot theater. Their work includes renditions of Anton Chekhov’s “Three Sisters”, Franz Kafka’s “The Metamorphosis”, and their own play “I, Worker”. Their work has spread internationally to Paris, New York, Toronto and Taipei.

For this interview, we would like to invite their collaboration partner Yi-Wei Keng, director of Taipei Arts Festival, to share his insights on the intersection of robotics and the arts…

…WENG: In Japan, an art theater in Tokyo performed a theatrical rendition of Osamu Tezuka’s “Black Jack”. The character “Pinoko” was played by a robot created by Waseda University’s Takanishi Laboratory. The arms, legs, and body of the Takanishi Laboratory developed robot are detachable and equipped with 25 motors, so the robot can vividly resemble the Black Jack character. With your experience and expertise in performance art, what are your thoughts on this?

KENG: What surprises people most about robots or puppets is that we know they are objects but they act like they have soul inside. But if there were many robots in our life, then robots on stage would not be such a surprise. What matters is when the robot looks like a human being, then robot theater loses its meaning too because people can’t tell the difference from appearance. There are more and more animation films, but there is a psychological need to see real humans in films. That is what happens in animation film, we don’t want to see the animation, which shoots like the real movie, we want to experience the pleasure of difference and surprise.

Comments Off on When robots become art: Interview with Yi-Wei Keng #ArtTuesday