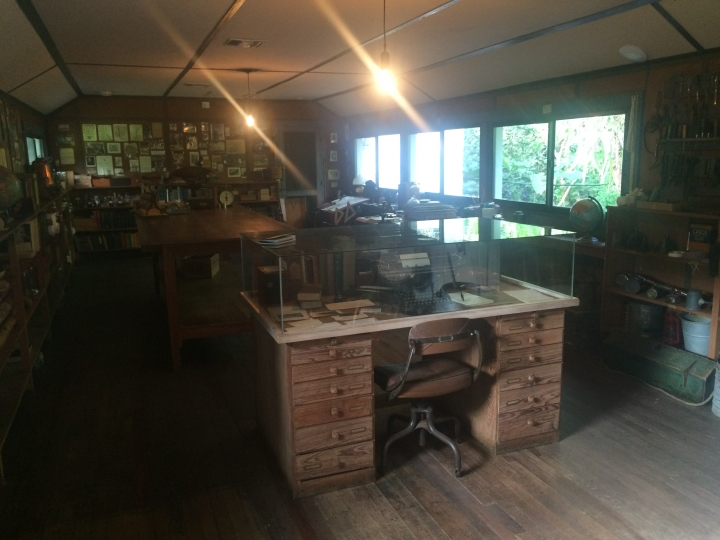 Mango season here is smelly: the soft, oval-shaped fruits fall to the pavement in wet heaps, releasing a scent that’s at once fresh and rotten. The Fairchild mango is one of the most common varieties, with its yellowish skin and bright orange flesh. It’s so familiar that it seems native to South Florida, but in fact it was introduced to the state in 1936 by Dr. David Fairchild, the botanist and explorer for whom the mango is named.

Fairchild established the Office of Seed and Plant Introduction, a branch of the United States Department of Agriculture, in 1898. Its purpose was economically sound; in a 1906 pamphlet for the program, botanist A.J. Pieters wrote, “in many sections there is a crying need for anything that will grow and out of which the cultivator can make money.”

Fairchild and the program’s botanists brought to the United States — among other crops — the Japanese cherry trees now found in Washington, DC, wheat and soybean cultivars, dates, and a slew of tropical fruits. The introduction of so many drought-resistant crops was good for business, but Fairchild’s greatest accomplishment may have been the expansion of the American palate — the joyous accessibility of delicious things. He loved tropical fruits, and is either partly or entirely responsible for some or all varieties of avocados, pineapples, and mangosteens — as well as apricots, figs, coffee, and cauliflower — found stateside today.

A sense of whimsy permeated his studies. In his 1939 book, The World Was My Garden, Fairchild wrote, “a small microscope will reveal wonders a thousand times more thrilling than anything which Alice saw behind the looking-glass.” It’s in the spirit of this exploratory wonder that artist Mark Dion has created a reimagined version of Fairchild’s lab (titled “David Fairchild’s Laboratory at the Kampong“) at the botanist’s former home, the Kampong, in Coconut Grove.

The Kampong is a jewel, located close to Fairchild Tropical Garden, a woodsy garden as lush as it is hidden. Fairchild and his wife, Marian Hubbard Bell — an artist and the daughter of Alexander Graham Bell — purchased the property in 1916, 18 years after Fairchild’s first visit to Florida to check out the Seed and Plant Introduction’s experimental garden near Biscayne Bay. The Kampong draws its name from the Javanese or Malay word for a small village — many of Fairchild’s cultivars came from this region of the globe — and became an experimental garden all its own. As the Fairchilds’ winter home, the Kampong was the botanist’s testing lab for new cultivars. (After Edward and Catherine Sweeney purchased the Kampong in 1963, Catherine, a botanist herself, preserved the garden in Fairchild’s tradition, leaving the estate to the National Tropical Botanical Garden, which has run it since.)

In his installation, commissioned by the Kampong and on permanent display since the beginning of the month, Dion has transformed Fairchild’s former lab from a sparsely decorated room into a library of oddities in which one might spend hours poring over books and cradling seedlings. The floorboards still creak; the windows of the office, which is located up a flight of stairs, look down from on high at the trees below. Dion spent two years collecting scientific ephemera — some of it donated from Fairchild’s kin, some foraged himself. A coconut scraper hanging from a door is inscribed with “MADE FOR D.F. AND USED FOR MANY YEARS AT ‘THE KAMPONG.’” (This item is not a fiction — it was discovered in the property’s main house.) There are microscopes, test tubes stuffed with seeds and capped with cotton wads, empty beakers crowded in the corners of shelves, tins of seedlings and pods. Quills are at the ready; shovels are hung on a rack. There’s a briefcase by the desk, a globe slightly askance. This is the real magic of Dion’s recreation: its intention is not historical accuracy, but rather the imaginative suggestion that Fairchild is still here. He just dropped his suitcase in a huff, took a look at his current specimens, and left momentarily to grab something from the kitchen. He’ll return, too soon, to find us intrusively touching his things. (“NO SMOKING PLEASE/The papers of a lifetime are stored here,” a sign reads, though whether it’s Fairchild’s or Dion’s is anyone’s guess.) 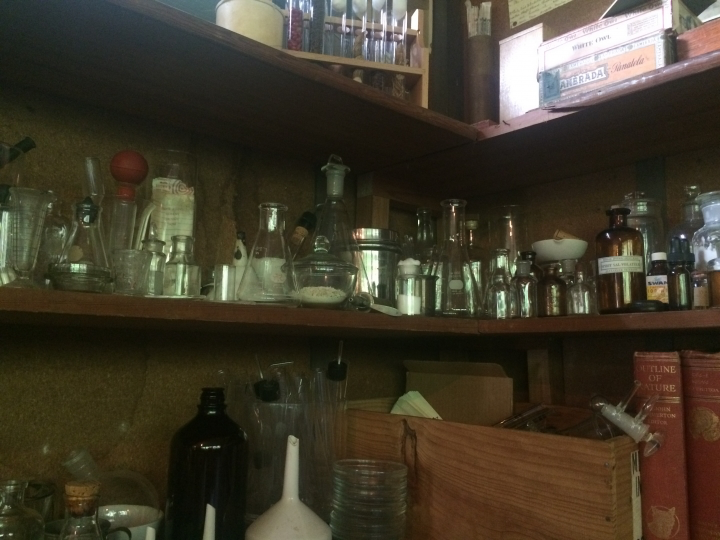