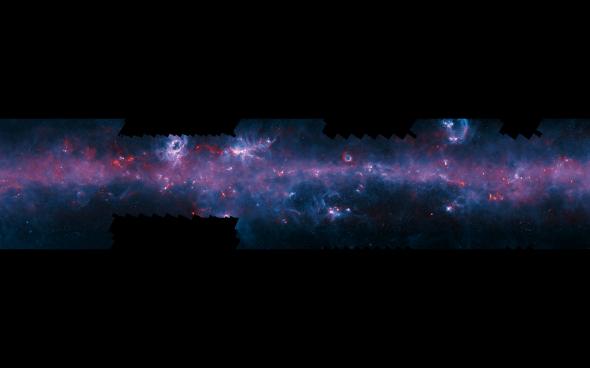 Have you ever seen a photograph so detailed, you could stare at it for 8 solid minutes? As this video shows, at least one image qualifies.

The image featured is of the southern galactic plane, as observed from Earth’s southern hemisphere. It was created by the European Southern Observatory (ESO) under the project name APEX Telescope Large Area Survey of the Galaxy, or ATLASGAL.

ATLASGAL is basically a compilation of several images. The reds were captured by the Large Bolometer Camera of Chile’s APEX telescope, which measures incoming radiation by minute temperature changes, scanning the sky at wavelengths between infrared light and radio waves. The camera can even detect emissions from bands of dust that partially obfuscate light from distant stars. Beneath that is a blue background image from NASA’s Spitzer Space Telescope, which looks at shorter infrared wavelengths. Finally, the fainter red elements are from the ESA’s Planck satellite.

Together, the detail is amazing—as is the opportunity it affords for scientists. According to the ESO’s Leonardo Testi, “the new release of the full survey opens up the possibility to mine this marvelous dataset for new discoveries.”

The video itself is simple, but breathtaking. It just scans the ATLASGAL image, showing us the vast beauty of the Milky Way. The sheer number of objects is stunning; there’s a reason we use the word “astronomical” for unimaginable amounts. And it serves as reminder that space remains amazing, inspiring, and infinite.

Comments Off on ATLASGAL Survey of Milky Way Completed #CelebratePhotography