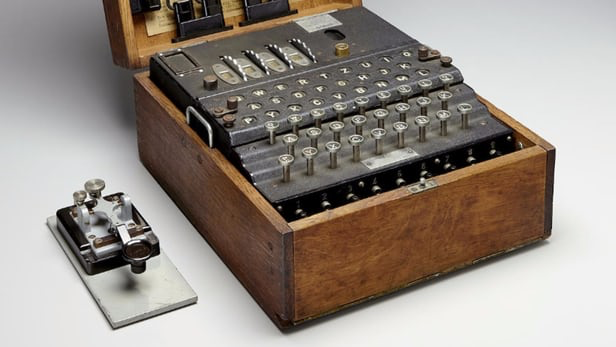 One of the rarest surviving Enigma cipher machines has sold at auction for a record price of US$463,500. An artifact of one of the most exciting episodes of World War II, the fully operational Enigma M4 was made in 1943 for Admiral Doneitz’s Kriegsmarine to send secret messages to the German U-boat packs at the height of the war. It was part of the Bonhams History of Science and Technology Sale in New York City and easily surpassed the previous record of US$350,000 set in 2015.

According to Bonhams, only 120 out of 1,600 Enigma M4 machines still exist, with most of them in government storehouses. The M4 Naval Enigma was developed in 1941 after Doenitz rightly suspected that the previous M3 machine was compromised by Allied codebreakers. The Enigma used a complicated series of electromechanical circuits running through banks of four removable rotors and plugs that could be programmed to produce 153 trillion unique sequences to foil decryption experts.

The Germans used the M4 exclusively to send communications between the German Naval High Command and the U-boat wolf packs attacking Allied shipping. The Nazi High Command believed the Enigma to be a highly secure means of communication, but British decryption teams, which included computer pioneers Alan Turing and Tommy Flowers, used some of the earliest and most advanced computers to break the Enigma codes and read some of the German’s most secret messages, giving the Allies a significant advantage over the Axis.