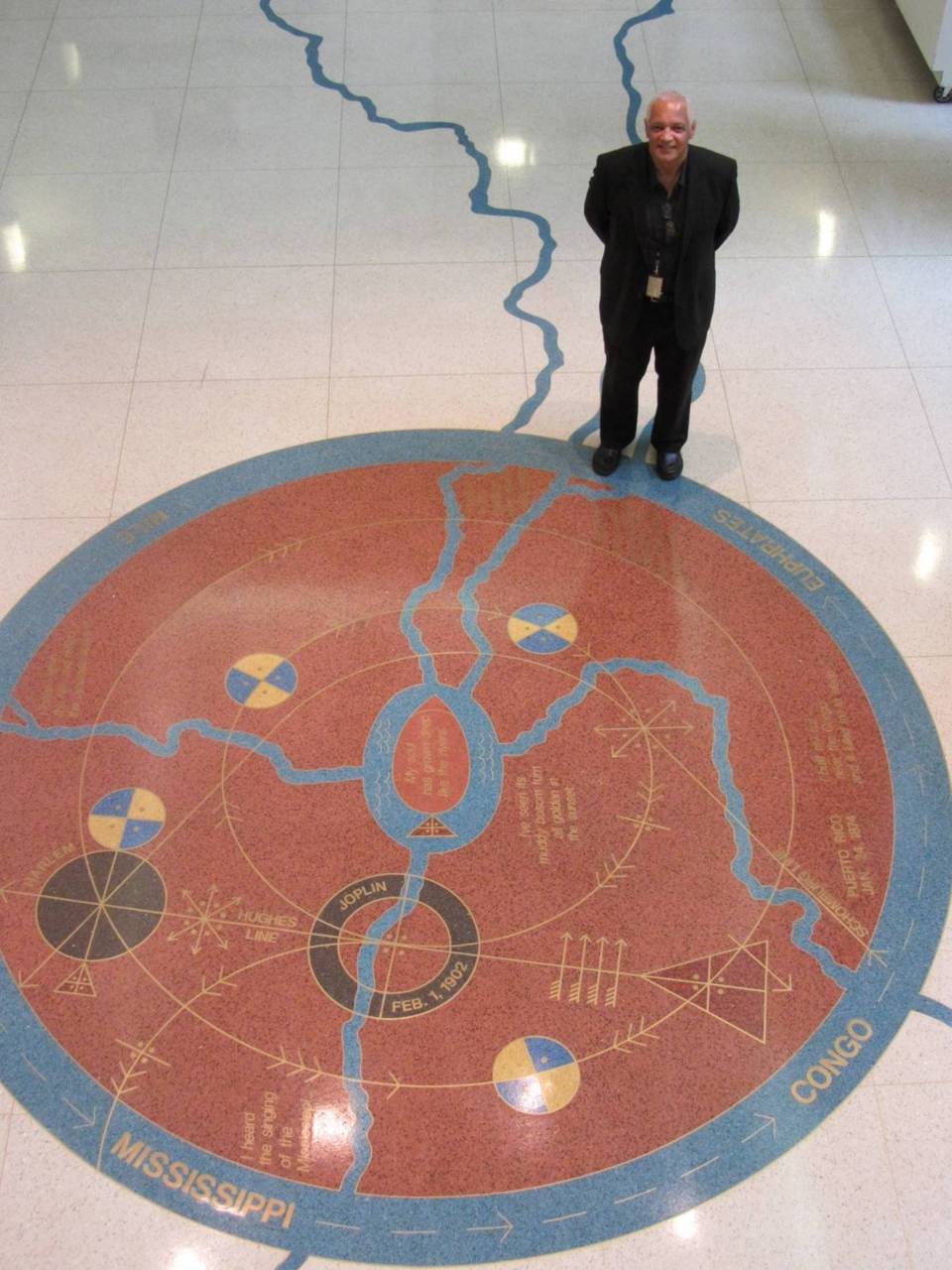 Houston Conwill, a sculptor best known for collaborative site-specific works celebrating African-American culture passed away on November 14th 2016. His works are on display are in New York as well as worldwide. His cosmogram (pictured above) is on permanent exhibition in the main atrium of the Schomburg Center for Research in Black Culture in Harlem, Via New York Public Library

On November 14, 2016, Schomburg Center staff mourned the passing of sculptor Houston Conwill, whose Cosmogram on view in our Langston Hughes Lobby has attracted patrons from across the globe. Back in 1989, the Schomburg Center, along with the New York City Cultural Affairs Percent for Art Program, announced the winner of an art competition that attracted 150 artists from all over the world. It was Conwill’s “Rivers” Cosmogram proposal, a memorial tribute to poet Langston Hughes and Schomburg Center founder Arthur A. Schomburg, that was unanimously selected to grace our library’s newly renovated lobby floor at the time. He would later visit the Schomburg as a researcher or attend a public program, and he would always check on his Cosmo gram.

The 1,150 square foot terrazzo floor is located in front of our Langston Hughes Auditorium, usually surrounded by a number of people taking pictures of its mandala shape accented with an inscription of Langston Hughes’s famous poem, “The Negro Speaks of Rivers.” Many visitors like to interpret the text of the poem and the names of the great rivers flowing like a stream from the peripheral of the wall all the way to the middle, beneath which a portion of Langston Hughes’s ashes are interred.

“Rivers” is a gathering place. The work is communal yet sacred. Some dance on it (as seen in this Chester Higgins photo of Maya Angelou and Amiri Baraka , which is also housed in the Photographs and Prints Division), but there are those who walk around it. It’s to be admired and discussed, a piece that encourages all of us to learn and contemplate our shared cultural journey from Africa, the Caribbean and the South. It’s arguably Conwill’s most famous and recognized work with an estimated 300,000 plus people viewing it yearly here at the Schomburg.

In his legacy, Conwill’s wife, Kinshasha Holman Conwill, who is also the deputy director of the Smithsonian’s National Museum of African American History and Culture, wants us all to remember to be kind to one another. And because of the significant impact Conwill has had on the Schomburg Center, in lieu of flowers she asks all those who would wish to honor Houston to donate to the library.

what is a cosmogram you ask? Via Wikipedia

A cosmogram is a flat geometric figure depicting a cosmology. Some of them were created for meditational purpose. Mandalas are the best known cosmograms, but similar diagrams, known as schema, were also used in western Europe during the Middle Ages.