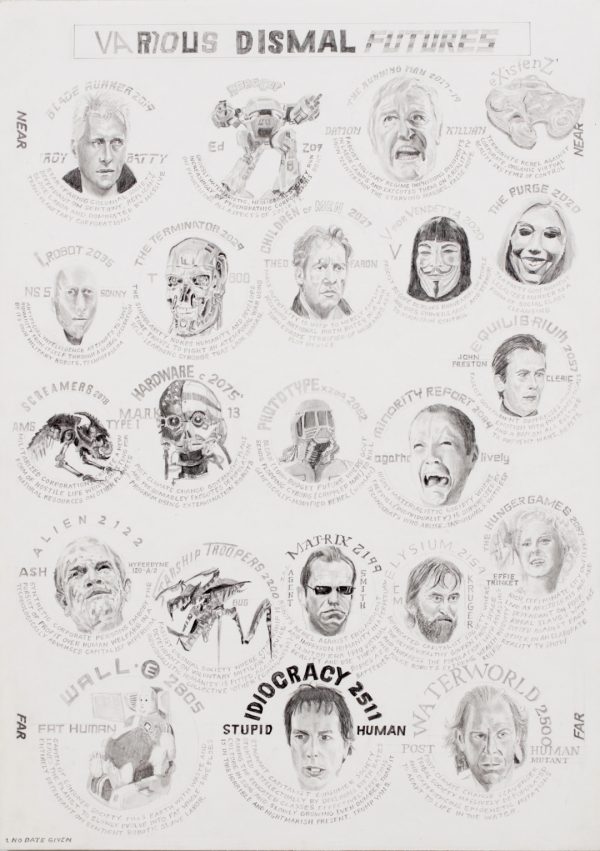 Over the last year and half, I’ve been slowly developing ideas for an upcoming show at the Aldrich Contemporary. At some point, my ideas entered the territory of speculative fiction. This past spring and summer — as the election oozed across the social media landscape like a corrupting presence from an H.P. Lovecraft story — I worked on a series of drawings about the presidential candidates. After I finished the series which situated Donald, Hillary, and Bernie in policy-based, historical, and pop culture contexts, I started thinking about dystopias I had read about or seen in films.

Having consumed an irresponsible amount of sci-fi and horror, I arrived at the dismal futures in the drawing by looking at when certain films were fictionally set. I was looking for futures that hadn’t quite occurred yet. Many films, like Escape from New York, didn’t work as their futures had already past. That film’s fictive 1998 setting and its generally racist vision of New York as a vast prison still foreshadowed the rise of another horrible man, Rudolph Giuliani. Other films from the 1970’s and 80’s like Blade Runner and Robocop presented dystopian futures that are almost upon us, but in particular, Robocop’s neoliberal, corporate scheme to both automate and privatize the Detroit Police Department against a backdrop of a massive, real-estate development gentrification project is, well, very prescient! As one might say on Twitter, “I didn’t know Robocop was a documentary.”