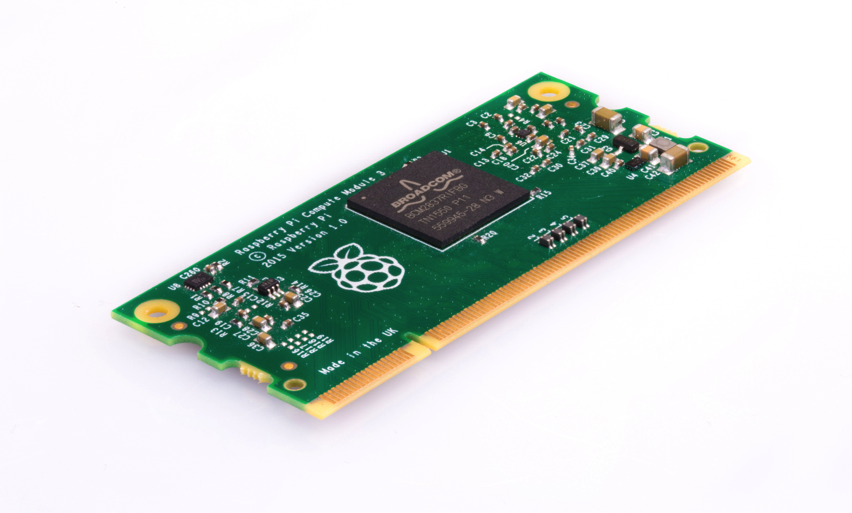 The MagPi has the scoop on the new, more powerful Compute Module 3.

The Raspberry Pi Foundation has launched a new version of its Compute Module – a Raspberry Pi in a more flexible form factor, intended to provide an easy and cost-effective route to producing customised products. While the original Module, launched in 2014, contained the guts of a first-generation Pi, the new Compute Module 3 (CM3) is based on the Pi 3, so offers a major boost in performance.

“It’s got the same BCM2837 processor which can run at up to 1.2HGz and 1GB of RAM,” says Foundation COO James Adams. This means it provides twice the RAM and roughly ten times the CPU performance of the original Compute Module (CM1). Just like the Pi 3, the CM3 is able to run Windows 10 IoT Core, opening up many possibilities: “An IoT project can be ported from a Pi 3 onto a custom CM3-based system very easily.”

One issue with the CM1 was the fixed 4GB of eMMC flash storage: “Some users wanted free access to add their own flash [storage],” explains James. To solve this, two versions of the CM3 are being released: one with 4GB eMMC on-board and a ‘Lite’ model which requires the user to add their own SD card socket or eMMC flash. “We expect this version to be quite popular.”

With a few caveats, the CM3 can be used a drop-in replacement for the CM1 since they are pin compatible; the CM3 is 1mm taller, however, while the CPU can pull a lot more current from the VBAT power supply line and will generate far more heat under heavy load.

The Compute Module 3 and CM3 Lite are priced at $30 and $25 respectively (excluding tax and shipping), while the CM1 (which isn’t being obsoleted) is $25. An updated IO breakout board (CMIO3) has also been launched, which will accept all three models. You can purchase yours from element14 or RS Components.

Comments Off on Compute Module 3 out now! #piday #raspberrypi @Raspberry_Pi