The Design Evolution of Beer Can Openings

This particular design evolution came to us Via Core77

The greatest technological challenge of the 20th Century was not the moon landing; it was how to get fresh, delicious beer from a brewery into a customer’s belly. Prior to the 1930s if you wanted beer, you and a guy named Amos rolled a barrel from the brewery back to your village, tapped it, and distributed it into jugs. (One benefit of this method was that in a financial pinch, the barrel could be worn in lieu of clothing, but it was otherwise inconvenient.)
Glass-bottled beer also existed, but you try transporting a crate of it over a bumpy wagon trail without breaking any of the bottles, especially while you’re drinking from one.
In the 1930s manufacturing technology made a huge leap forward: It become possible to seal beer inside of steel cans.

Cans were easier to stack, ship and carry, weighed less than glass bottles and were less prone to breakage. One drawback was that you could not break a can over a counter and brandish it during a saloon brawl, but this was offset by the fact that you could crush one against your forehead, which never failed to impress the ladies and establish you as “a real character.”
But they key problem with cans was how to get the beer out of them. The tops of these cans were flat…

That “church key,” as it’s called, was used to lever two triangular piercings into a can, one for your mouth, the other for airflow.

Seeking a better way, innovative package designers of the time then developed the cone-top can in 1935:

If you ask me, this is kind of a lateral move. You still needed to carry an implement around, in this case a bottle opener rather than a church key. But one benefit was that you gained a bottlecap with each can. (During the Great Depression, bottlecaps were basically your kids’ Xbox.)
Both the flat-top can and the cone-top persisted into the 1950s and ’60s. But in 1959 an engineer named Ermal Fraze was on a family picnic and forgot to bring a church key. Fraze was forced to open his beer cans using his car bumper, like some kind of alcoholic MacGyver. He subsequently invented the pull-tab: 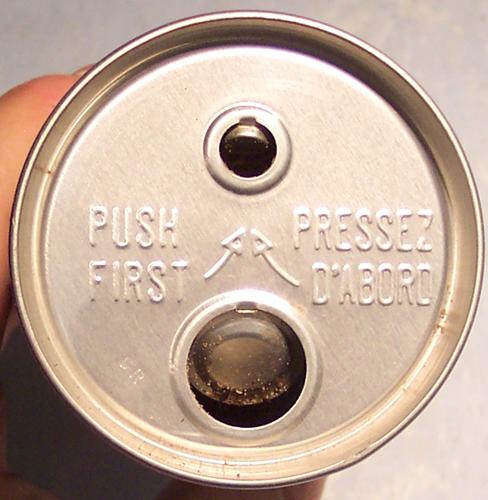 Filed under: design and architecture —
Tags: design — by Jessie Mae

Comments Off on The Design Evolution of Beer Can Openings