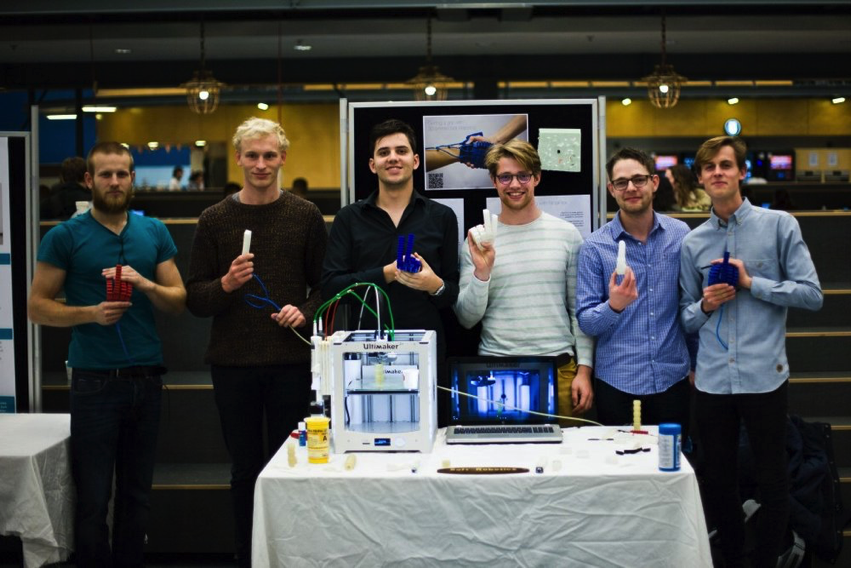 In the world of soft robotics, advanced manufacturing often plays an integral role in the fabrication of complex and intricate structures. In many cases, 3D printers, CNC machines, laser cutters, and more are irreplaceable. Here at Super-Releaser, 3D printers are key to our prototyping workflow, and as a result of this relationship, enhancement in advanced manufacturing often results in innovation in the field. A great example is how multi-material jetting printers allowed researchers at the Harvard Wyss Institute in 2015 to create a jumping robot that smoothly integrates both hard and soft components.

Recently, students at Delft University of Technology also developed such an innovation: a 3D printing system that allows for easier fabrication of silicone structures while being very inexpensive. The team, consisting of design and engineering undergraduates Christoffer Bendtsen, Oliver Groot, Max Nobel, and Luc van den Boogart set out to investigate new methods of fabricating soft robots, specifically by investigating a concept originally explored by Lars Rossing called UltiCasting. The UltiCast system consists of a modified Ultimaker 2+ 3D printer that has a paste extruder system with motorized syringes (similar to the likes of the MakerBot Frostruder) alongside the normal nozzle. The main nozzle prints out a thin-walled mold made from PVA, a water-soluble plastic, and then uses the secondary extruder to passively mix a 1:1 silicone resin and dispense it into the shell mold.

After the silicone has cured, it can be taken off the printer and the plastic mold can be dissolved away, leaving just the silicone behind. By having the casting process automated like this and pouring the mold as it is printed, the UltiCast system speeds up the fabrication of a silicone structure tremendously. It also reduces the room for human error, as having the mold printed and casted as one operation eliminates the need for complex mold assemblies.