Playing The Founder: A Dystopian Business-Simulator is an interaction with the dark side of tech, in which you grow a company from your humble apartment into a world-destroying monster. And after that, there’s always Mars for a new market.

When I covered the Kickstarter for The Founder last fall, Tseng explained that management simulations “often reinforce or try to validate existing systems rather than examine them critically. For the most part these games are not conscious of their own perspectives and assumptions, so they can’t be critical of them.” For example, eradicating crime in SimCity can only be achieved by increasing police stations, instead of, say, adding parks to your giant lizard–ravaged neighborhoods. 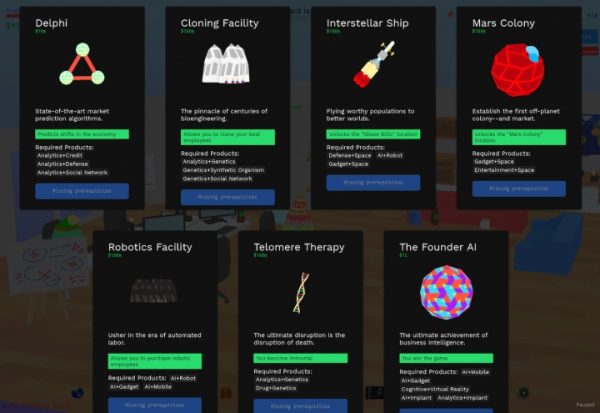 The Founder is critical to the point of cynical, but spot-on in its simulation of startup culture: your employee buses come with “number of protests” in their stats, and one “win the game” option involves you, the founder, adopting transhumanism and becoming immortal with telomore therapy. (The “ultimate disruption is the disruption of death,” the game text quips.)