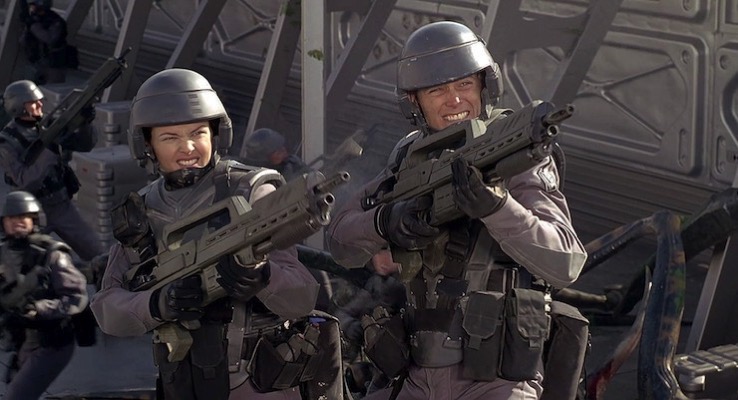 Michael Moreci pens a convincing defense of the oft underrated film Starship Troopers up on Tor.com.

My goodness, is Starship Troopers an under-appreciated movie. It’s also a strange movie, even by ’90s standards. It shares a space with Demolition Man, representing satirical sci-fi movies that, now, have more or less become a punchline. Demolition Man—while it’s admirable for what it was trying to do—suffers from poor execution. But Starship Troopers hits the exact mark it’s going for; it’s just largely misunderstood by audiences.

The thing is, if you watch Starship Troopers with a straight face, it doesn’t work all that well. It’s weirdly melodramatic, the performances aren’t all that good, and the antagonists are just giant bugs, amongst other things. It can be seen as “one-dimensional” or “immature,” as Roger Ebert, and other critics, have complained. But, as with all Paul Verhoeven movies, Starship Troopers is not meant to be watched with a straight face. Verhoeven makes movies with his tongue buried so deep in his cheek it almost comes through the other side, and that penchant for taking something very serious not seriously at all is one of the things that makes Starship Troopers so uniquely great.