Today we celebrate Solomon G. Brown, who worked at the Smithsonian for fifty years and held a variety of respected posts during the 19th and early 20th Centuries.

Read more about his inspiring story from the Smithsonian Institution Archives.

Brown was hired as a general laborer by the Smithsonian in 1852 under Henry. Initially, he built exhibit cases, cleaned and moved furniture for the Institution, and shortly thereafter became the supervisor of a small group of Smithsonian workers. Brown developed a close relationship with then Assistant Secretary (and later the Smithsonian’s second Secretary) Spencer F. Baird, a naturalist, and the two worked together closely until Baird’s death in 1887. Baird trusted Brown implicitly and when out of town relied on Brown to be his “eyes and ears” of the Institution. Brown and Baird frequently corresponded about the operations of the Smithsonian, city events, and their personal lives, sharing a wry sense of humor about life. From their letters we learn that Brown entertained visitors, handled the mail, made travel arrangements, and paid the household staff for the Baird family. We also get a sense of a free African American man’s perspective on the progress of the Civil War, as it raged around him. 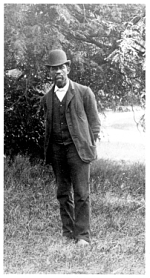