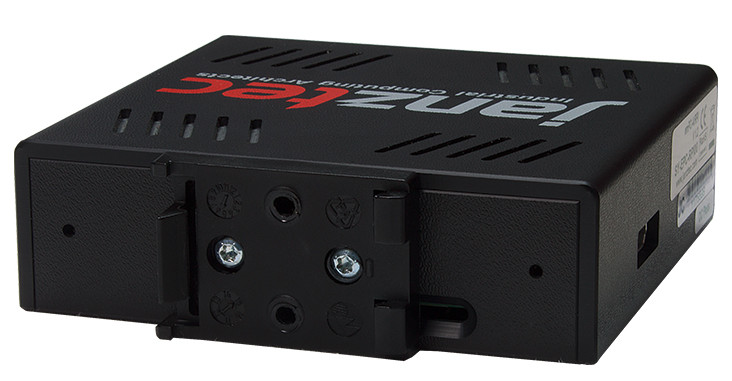 Janz Tec has released an industrial controller built around the Raspberry Pi 3, with WiFi, Bluetooth, CANbus, and CODESYS compatibility.

Saelig launched North American distribution for the latest in Janz Tec’s emPC-A/RPI line of Raspberry Pi based industrial controllers. The Raspberry Pi 3 derived emPC-A/RPI3 follows the almost identical, RPi 2 based emPC-A/RPI2, which was called the emPC-A/RPI when we covered it back in Aug. 2015.

The emPC-A/RPI3 has the same IP20-protected, 99.8 x 96.7 x 30mm enclosure and much the same feature set as the earlier model. It similarly runs a lightweight version of Raspbian Linux, in this case Raspbian Jessie Light, and is compatible with CODESYS soft-PLC runtime control software. Oracle Java Embedded is also supported.
The key difference is the Raspberry Pi 3’s 1.2GHz quad Cortex-A53, Broadcom BCM2837 system-on-chip, an upgrade from the 900MHz, quad Cortex-A7 BCM2836 on the RPI 2. The RPi 3 also supplies the emPC-A/RPI3 with WiFi and Bluetooth LE.

Other features appear to be identical, including the 24-pin expansion interface, which offers an isolated CANbus interface, supported with a protocol stack and tools, as well as RS232/485 and 8-bit DIO. The emPC-A/RPI3 offers other RPi-like features including 1GB DDR2 RAM, a microSD slot, a 10/100 Ethernet port, an HDMI port, and four USB 2.0 host ports. There’s also a 9-pin serial debug connection and a real-time clock (RTC).

The fanless device features a 9-32V wide-range power input, and supports temperatures of 0 to 35/45°C, according to Janz Tec, and 0 to 35/40°C, as per Saelig. The device supports desktop, wall, or DIN-rail mounting.

Each Friday is PiDay here at Adafruit! Be sure to check out our posts, tutorials and new Raspberry Pi related products. Adafruit has the largest and best selection of Raspberry Pi accessories and all the code & tutorials to get you up and running in no time!e!