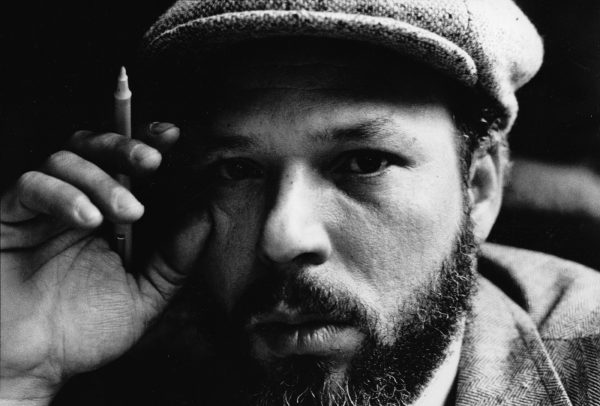 August Wilson was an American playwright whose work included a series of ten plays, The Pittsburgh Cycle, for which he received two Pulitzer Prizes for Drama. Each work in the series is set in a different decade, and depicts comic and tragic aspects of the African-American experience in the 20th century.

From The Paris Review

August Wilson has been referred to (by Henry Louis Gates, Jr.) as “the most celebrated American playwright now writing, and . . . certainly the most accomplished black playwright in this nation’s history.” Earlier this fall the beneficiary of Mr. Gates’s praise was in Atlanta to oversee the production of one of his plays. He took time off to meet for lunch at the Sheraton Hotel’s Fourteenth Street Bar, arriving in a black turtleneck sweater under a tweed coat. The tables in the bar are set up on a balcony overlooking the yellowgold emporium that is the hotel lobby. Wilson, who gave up cigar smoking years ago—though he lit one up upon the birth of his daughter, who is now two years old—asked to sit in the smoking section. No cigar on hand, he had purchased a pack of cigarettes at the lobby newsstand downstairs. He said he would give up cigarettes soon, as it would be ridiculous not to be around when his daughter goes to college.

Born on April 27, 1945, Wilson grew up in a workingclass area of Pittsburgh. His father, a GermanAmerican baker, abandoned the family when his son was only five. Wilson’s mother remarried and the family moved to a mostly white suburb. Fed up with racial indignities, he dropped out of school at sixteen and his real education started, so he has stated, in the local library. In 1968 he was a cofounder of Black Horizons Theater Company, though his artistic voice at the time was expressed in poetry. In 1978 he moved to St. Paul, Minnesota, where he wrote his first major play, Jitney. A subsequent play, Ma Rainey’s Black Bottom, submitted to the Eugene O’Neill Theater Center, came to the attention of Lloyd Richards, then artistic director of the Yale Repertory Theater. Richards helped Wilson refine the play, which then opened in 1984 in New Haven. Hailed as the work of an important new playwright, the play came to Broadway later that year, and marked the start of an astonishing career—including two Pulitzers (Fences and The Piano Lesson) and a number of Drama Desk Awards, as well as a Tony Award for works that include Joe Turner’s Come and Gone, Two Trains Running, Seven Guitars, and King Hedley II.