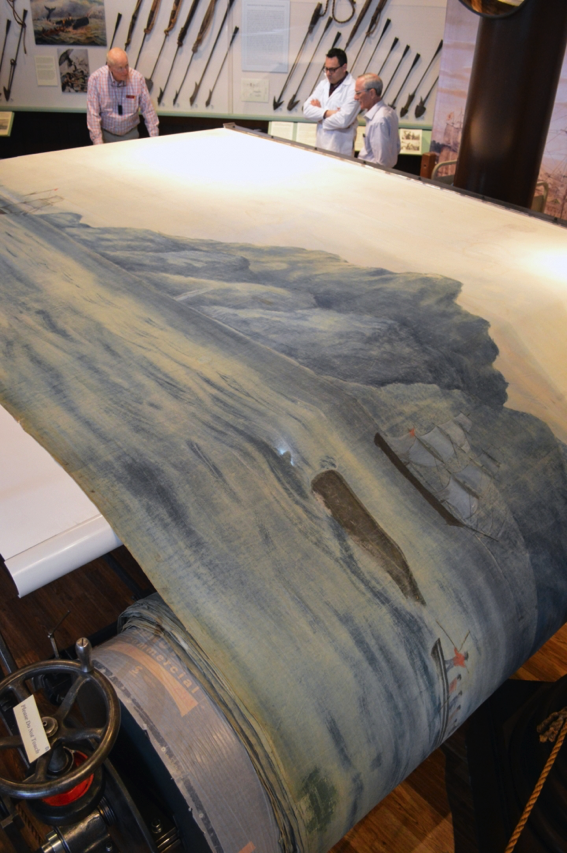 Before the dawn of film, motion picture entertainment was often literally a moving picture. From the late 18th to 19th centuries, entrepreneurs traveled the United States and Great Britain with colossal moving panoramas in tow. The large-scale paintings would be rolled between two huge spools for an audience, revealing a narrative through a succession of images.

Among these mostly lost wonders is America’s longest painting. The 1848 “Purrington-Russell Grand Panorama of a Whaling Voyage Round the World,” owned by the New Bedford Whaling Museum in Massachusetts, stretches 1,275 feet in length and stands eight and a half feet tall. To put that in perspective, the museum has a graph comparing its length to 14 blue whales or 28 school buses. While the panorama had numerous exhibitions around the country in its heyday, including an appearance at the 1964 New York World’s Fair, it hasn’t been displayed in over 50 years. A restoration project, supported by a 2016 award from the New Bedford Whaling National Historical Park, aims to return it to view.

“It is being conserved now as the culmination of a nearly 20-year effort to stabilize it,” Jordan Berson, the museum’s director of collections and head of the panorama conservation project, told Hyperallergic. “There are tears, holes, and several sections were cut out. These are all being reintegrated back into their original order. Since the New Bedford Whaling Museum received the panorama in 1918, we hope to have it conserved and displayed in its entirety for the 100th anniversary of our custodianship.”