My favorite line from Steve’s description (below) is when he says, “There were two Mir Space Stations.” Whaaaaa? But then he goes on, and it makes sense. So for all intents and purposes this is not a replica, but an actual working sensor control panel used on MIR – awesome! 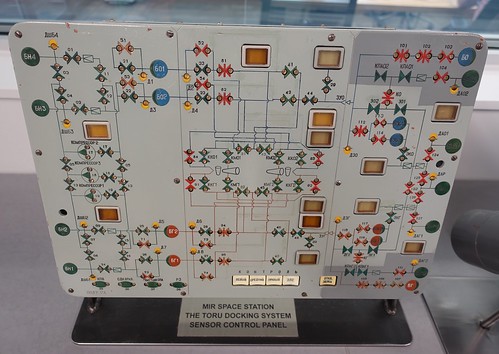 I love the user interface to illuminate the status of a flow digram of control valves and sensors… and how the errors in the engraved groove lines have been painted over.

There were two Mir Space Stations. One burned up on reentry, ending its space odyssey in 2001. The second was used for astronaut training in Russia. This control console and monitor comes from the one that survived, and was used by every astronaut and cosmonaut that visited Mir.

The Mir space station orbited the earth for fifteen years; its assembly in orbit began with the core module launch in 1986 and continued for ten years. It was occupied by a crew for more than twelve years of its fifteen year life, playing host to 125 space travelers from twelve different countries. After 86,331 total orbits, Mir re-entered Earth’s atmosphere on March 23, 2001, breaking up over the southern Pacific Ocean.

In context, the panel can be seen installed in the upper-left of this image: