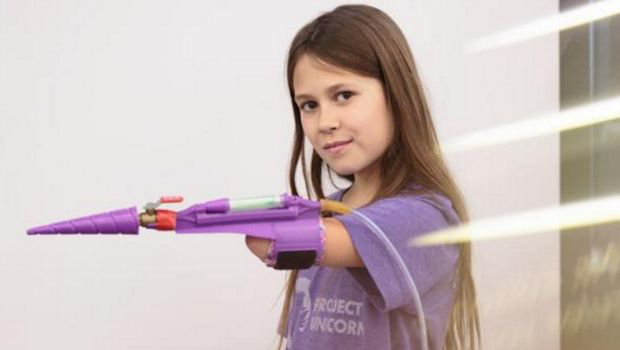 This might be my favorite 3D printed prosthetic arm I’ve seen yet! Via MAKERS

Eleven-year-old Jordan Reeves has an arm that shoots glitter.

Born with an arm that stops above her elbow — a condition called limb difference that affects around 1,500 babies per year in the U.S. — Reeves became an inventor, creating a selection of cool prosthetics which she revealed to “Shark Tank” investors during Rachel Ray’s daytime show.

“You can never be sad with sparkles,” Reeves said on “Rachel Ray.”

The Columbia, Mo., native has been inventing the device since she was 10 years old, calling her glitter arm shooter, “Project Unicorn.” The device uses compressed air to activate the glitter. She also created a small tool that helps her use a two-handed paper towel dispenser with the help of a 3D printer.

Reeves is aware that her newfound device does draw attention.

“If they are staring, I’ll say ‘Don’t stare, just ask.’ I actually have a shirt that says that,” she said. “I want them to come up and ask me. I want them to know it’s OK. It’s not a bad thing. We all find our own way to do stuff.”

Comments Off on Project Unicorn: a prosthetic arm that shoots glitter #WearableWednesday