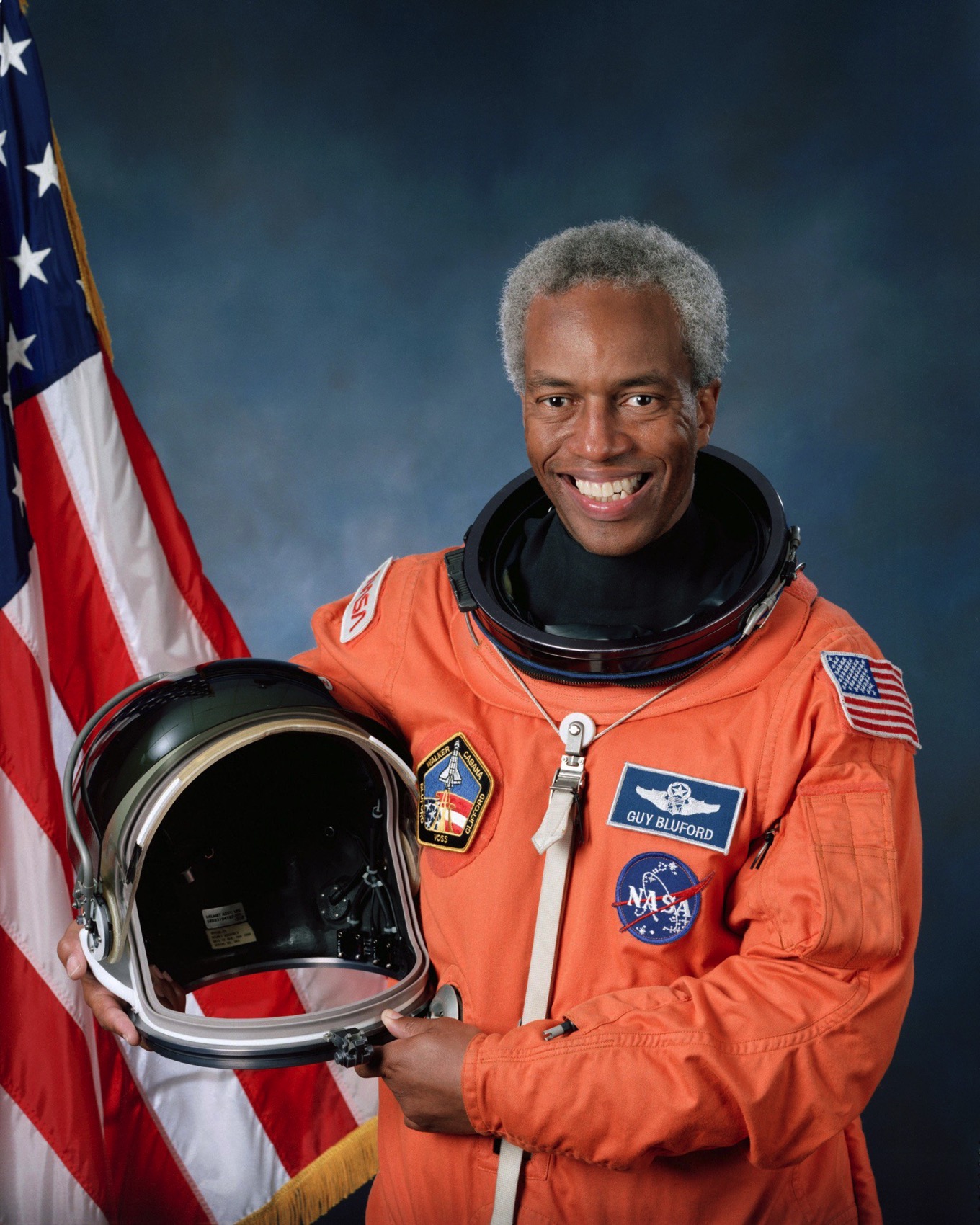 Guion S. Bluford became the first African American to travel into space in 1983, Via NASA

Bluford’s first mission was STS-8, which launched from Kennedy Space Center, Florida, on August 30, 1983. This was the third flight for the orbiter Challenger and the first mission with a night launch and night landing. During the mission, the STS-8 crew deployed the Indian National Satellite (INSAT-1B), operated the Canadian-built RMS with the Payload Flight Test Article (PFTA), operated the Continuous Flow Electrophoresis System (CFES) with live cell samples, conducted medical measurements to understand biophysiological effects of spaceflight and activated four “Getaway Special” canisters. STS-8 completed 98 orbits of the Earth in 145 hours before landing at Edwards Air Force Base, California, on September 5, 1983.

Bluford then served on the crew of STS 61-A, the German D-1 Spacelab mission, which launched from Kennedy Space Center, Florida, on October 30, 1985. This mission was the first to carry eight crew members, the largest crew to fly in space, and included three European payload specialists. This was the first dedicated Spacelab mission under the direction of the German Aerospace Research Establishment (DFVLR) and the first U.S. mission in which payload control was transferred to a foreign country (German Space Operations Center, Oberpfaffenhofen, Germany). During the mission, the Global Low Orbiting Message Relay Satellite (GLOMR) was deployed from a “Getaway Special” (GAS) container, and 76 experiments were performed in Spacelab in such fields as fluid physics, materials processing, life sciences, and navigation. After completing 111 orbits of the Earth in 169 hours, Challenger landed at Edwards Air Force Base, California, on November 6, 1985.

Bluford also served on the crew of STS-39, which launched from the Kennedy Space Center, Florida, on April 28, 1991, aboard the orbiter Discovery. The crew gathered aurora, Earth-limb, celestial, and shuttle environment data with the AFP-675 payload. This payload consisted of the Cryogenic Infrared Radiance Instrumentation for Shuttle (CIRRIS-1A) experiment, Far Ultraviolet Camera experiment (FAR UV), the Uniformly Redundant Array (URA), the Quadrupole Ion Neutral Mass Spectrometer (QINMS), and the Horizon Ultraviolet Program (HUP) experiment. The crew also deployed and retrieved the SPAS-II which carried the Infrared Background Signature Survey (IBSS) experiment. The crew also operated the Space Test Payload-1 (STP-1) and deployed a classified payload from the Multi-Purpose Experiment Canister (MPEC). After completing 134 orbits of the Earth and 199 hours in space, Discovery landed at Kennedy Space Center, Florida, on May 6, 1991.

On his last flight, Bluford served on the crew of STS-53 which launched from Kennedy Space Center, Florida, on December 2, 1992. The crew of five deployed the classified Department of Defense payload DOD-1 and then performed several Military-Man-in-Space and NASA experiments. After completing 115 orbits of the Earth in 175 hours, Discovery landed at Edwards Air Force Base, California, on December 9, 1992.

With the completion of his fourth flight, Bluford has logged over 688 hours in space.