We’ve now more or less catalogued the human genome and have an understanding of the process by which we produce that catalog. But just 100 years ago we didn’t know DNA’s structure. The ‘Jurassic Park‘ knowledge that you and I take for granted – “of course DNA is double-helix!” – had to be discovered, by someone.

While the Nobel Prize in Physiology or Medicine that is attributed to DNA’s discovery is held by James Watson, Francis Crick and Maurice Wilkins – three men – it was the historic Photo 51, taken by Rosalind Franklin (and Raymond Gosling), that lead to our understanding of the composition of DNA.

From the opening paragraphs on her Wikipedia bio:

Rosalind Elsie Franklin (25 July 1920 – 16 April 1958) was an English chemist and X-ray crystallographer who made contributions to the understanding of the molecular structures of DNA (deoxyribonucleic acid), RNA (ribonucleic acid), viruses, coal, and graphite. Although her works on coal and viruses were appreciated in her lifetime, her contributions to the discovery of the structure of DNA were largely recognized posthumously.

Franklin is best known for her work on the X-ray diffraction images of DNA, particularly Photo 51, while at King’s College, London, which led to the discovery of the DNA double helix for which James Watson, Francis Crick and Maurice Wilkins shared the Nobel Prize in Physiology or Medicine in 1962. Watson suggested that Franklin would have ideally been awarded a Nobel Prize in Chemistry, along with Wilkins, but the Nobel Committee does not make posthumous nominations.

Rosalind Franklin sadly died four years prior to the Nobel Prize being awarded, and also sadly a debate still exists within scientific circles about posthumous recognition of Franklin for her achievement in the field. 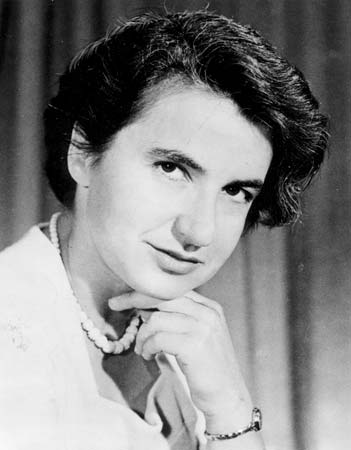 PBS NOVA have a good write-up on the timeline here, linked from their ‘Secret of Photo 51’ microsite.

‘The Dark Lady of DNA’ in the title takes its cue from Brenda Maddox’s book by that title that lays out one of the more accurate biographical timeline’s of Franklin’s work, contextualizing her discovery against the sexist and even anti-Semitic tendencies of her colleagues.

Rosalind Franklin died in 1958 at the age of 37 from ovarian cancer.