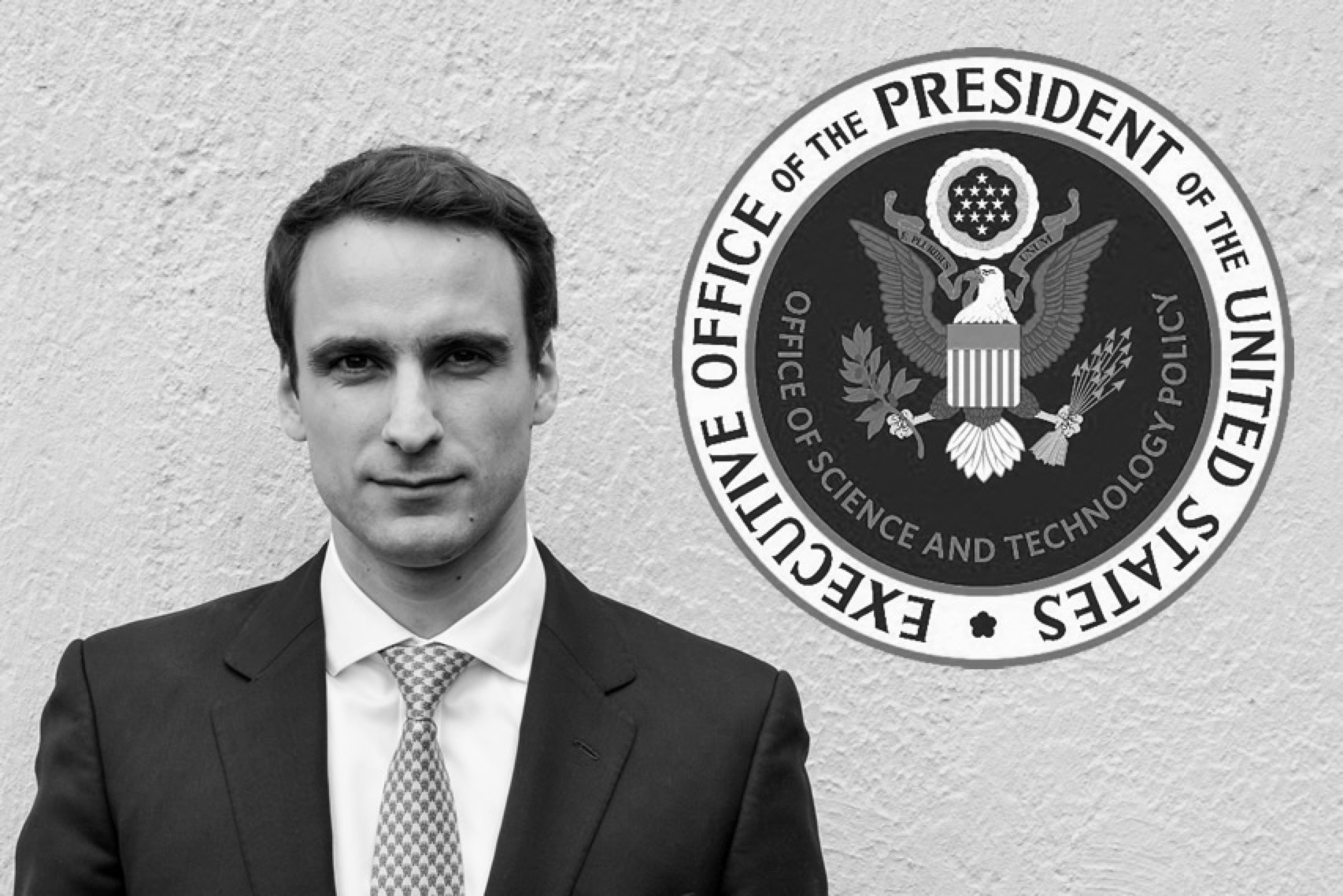 Adafruit isn’t a political news site, we do however cover relevant news or continuations of stories that are part of us being a SUCCESSFUL woman owned USA Manufacturer of electronics, right here in NYC, United States of America – read about Adafruit here. We are of course interested in what the new CTO thinks about USA manufacturers and makers.

SO – Not a widely reported story, but here it is – Michael Kratsios White House deputy CTO – TechCrunch –

Peter Thiel has been at Donald Trump’s side since the Republican National Convention, guiding the then-candidate on technology policy and brokering a meeting between him and top tech executives. Now Thiel has secured a place for one of his top aides in Trump’s White House — Michael Kratsios, formerly chief of staff at Thiel Capital, will step into the role of deputy chief technology officer.

The deputy CTO role was last held by Alexander Macgillivray, a former general counsel at Twitter. The role of White House chief technology officer, previously held by former Googler Megan Smith, has yet to be filled. The CTO works with the White House Office of Science and Technology Policy on a broad mandate of issues involving data, innovation and technology policy.

Michael is not on the whitehouse.gov site yet.

I work at Thiel Capital in San Francisco.
I have a passion for technology, politics, Greece, and travel.
I occasionally take photos.
…

Michael works at Thiel Capital in San Francisco. Previously he served as Chief Financial Officer of Clarium Capital Management, a global macro hedge fund, and began his career at Barclays Capital in the Investment Banking Division.

Michael graduated with high honors from Princeton University in 2008 with an AB in Politics and a concentration in American Politics. He also received certificates in Political Economy and Hellenic Studies. His research focused primarily on economic voting. Michael was awarded the Carolyn M. Picard Prize in Politics and the Hellenic Studies Senior Thesis Prize for Economics and Voting in the Third Hellenic Republic. Before moving to California, Michael spent a semester in China as a Visiting Scholar at the School of Economics and Management at Tsinghua University in Beijing.

Michael is extensively involved with the Foundation for Student Communication(Business Today), a nonprofit founded by Steve Forbes in 1968 and managed by Princeton undergraduates. Michael served as Editor-in-Chief of Business Today Magazine and later as President of the Foundation. He has served on the Foundation’s Board of Trustees since 2008 and currently chairs the board’s Program Committee.

Michael previously served on the Board of Directors of the International Model United Nations Association, a UN-affiliated global education non-profit. At Princeton he was a Butler College Undergraduate Fellow, volunteered as a Tiger Sports youth soccer coach, and was a member of the Princeton First Aid and Rescue Squad as an EMT. Michael is also a distance runner, completing his first marathon in Philadelphia in 2005 and recently participating in the 199 mile Calistoga to Santa Cruz Golden Gate Relay. Michael qualified for the Boston Marathon in Sacramento in 2013. 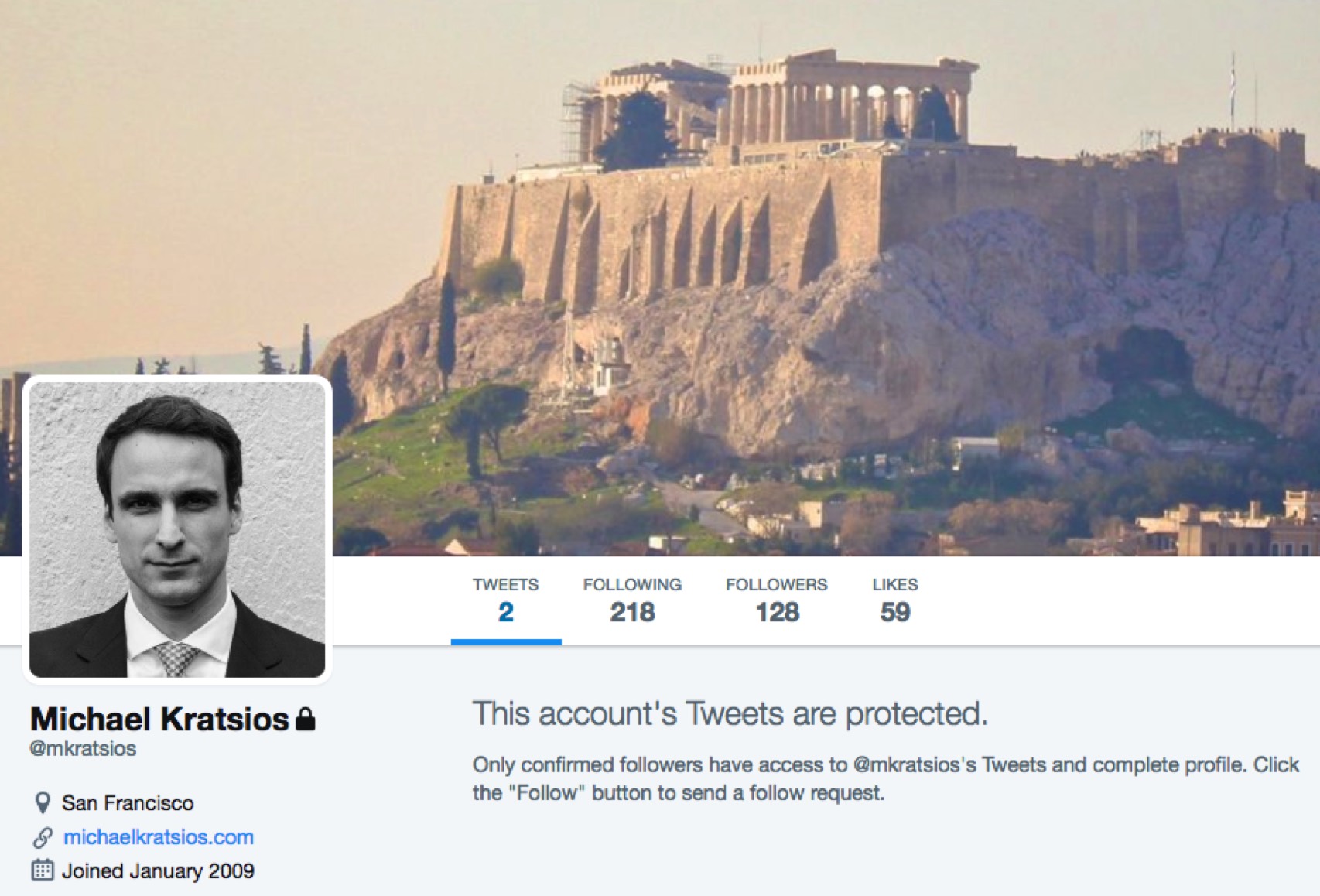 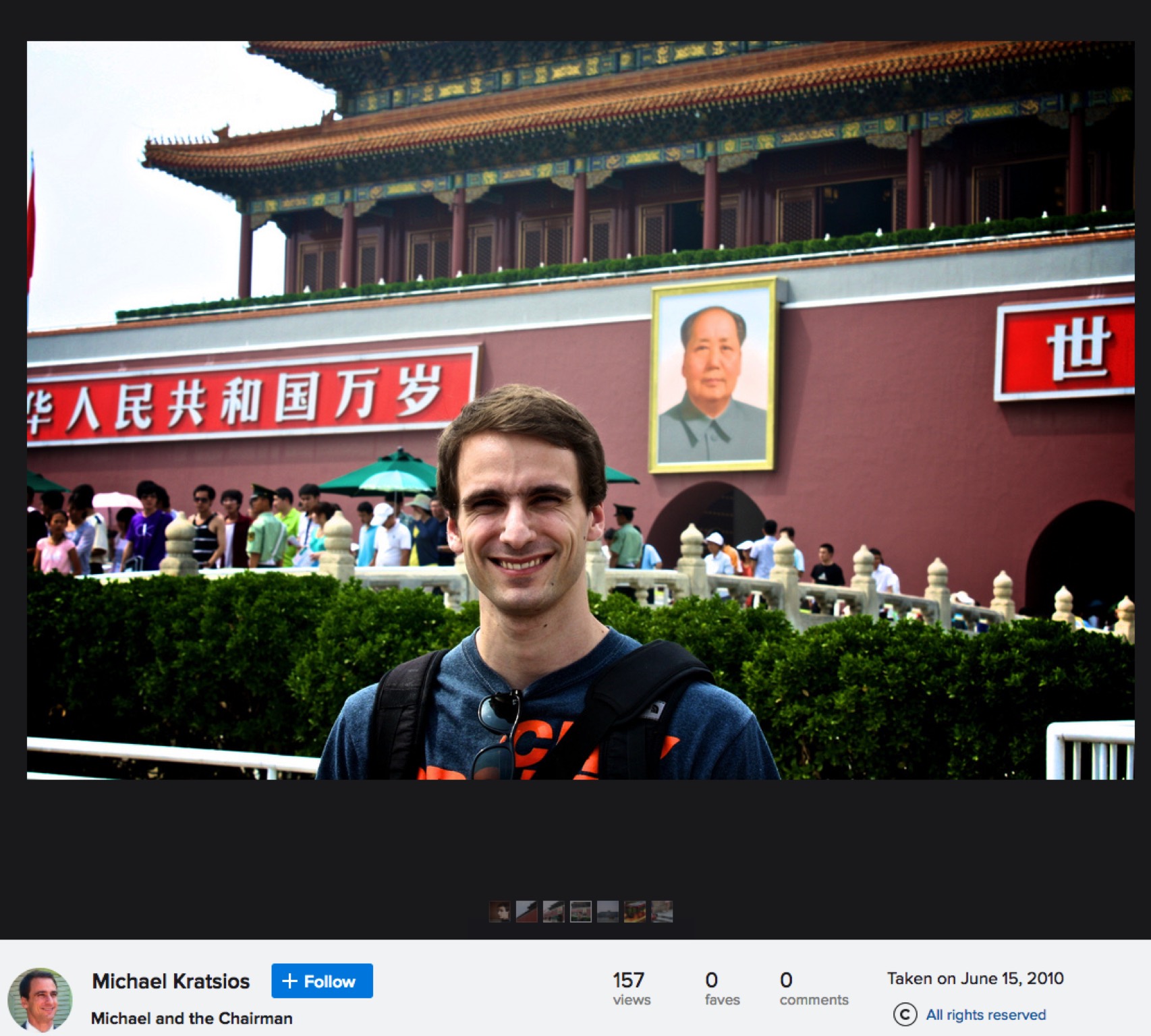 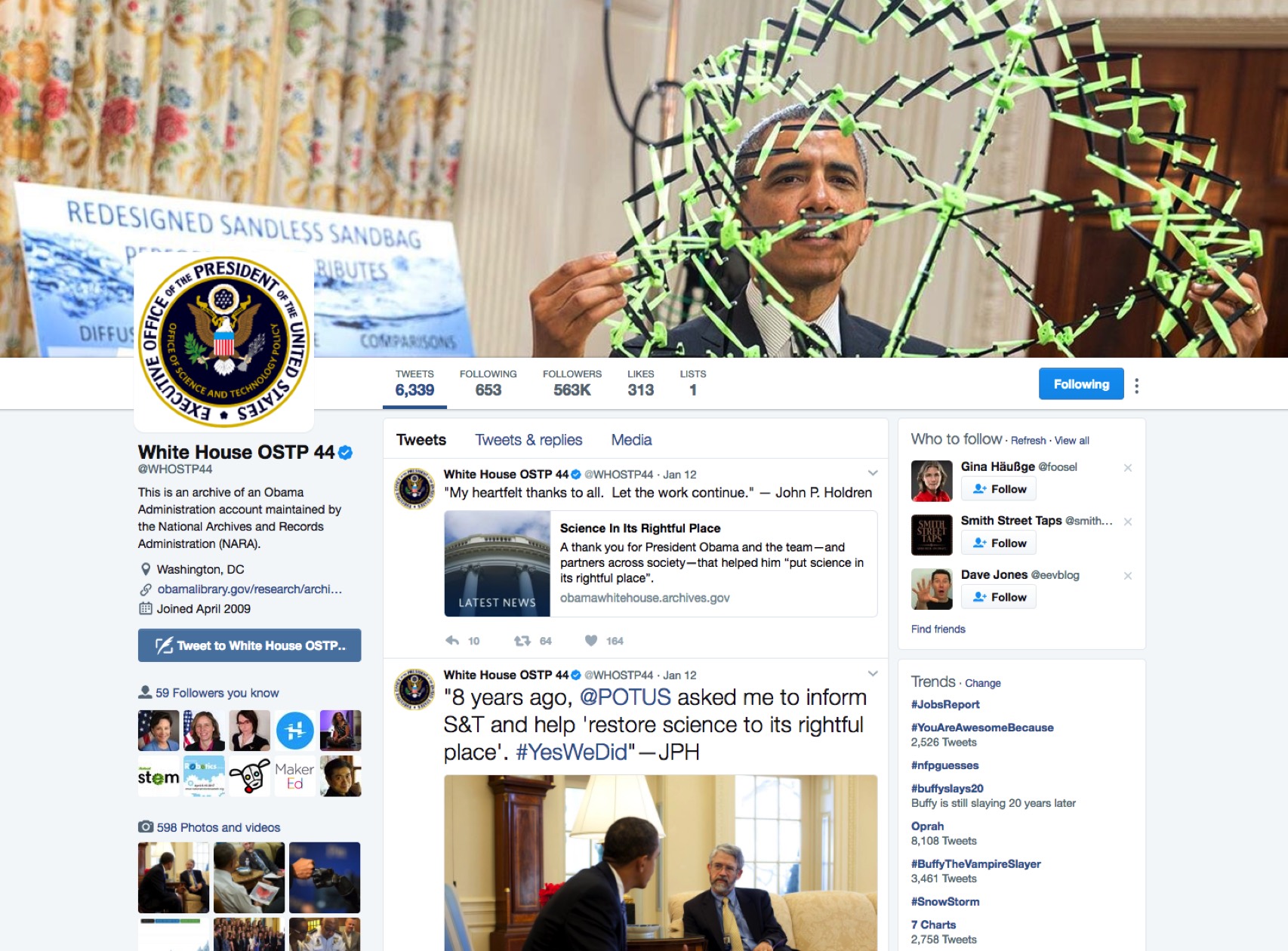 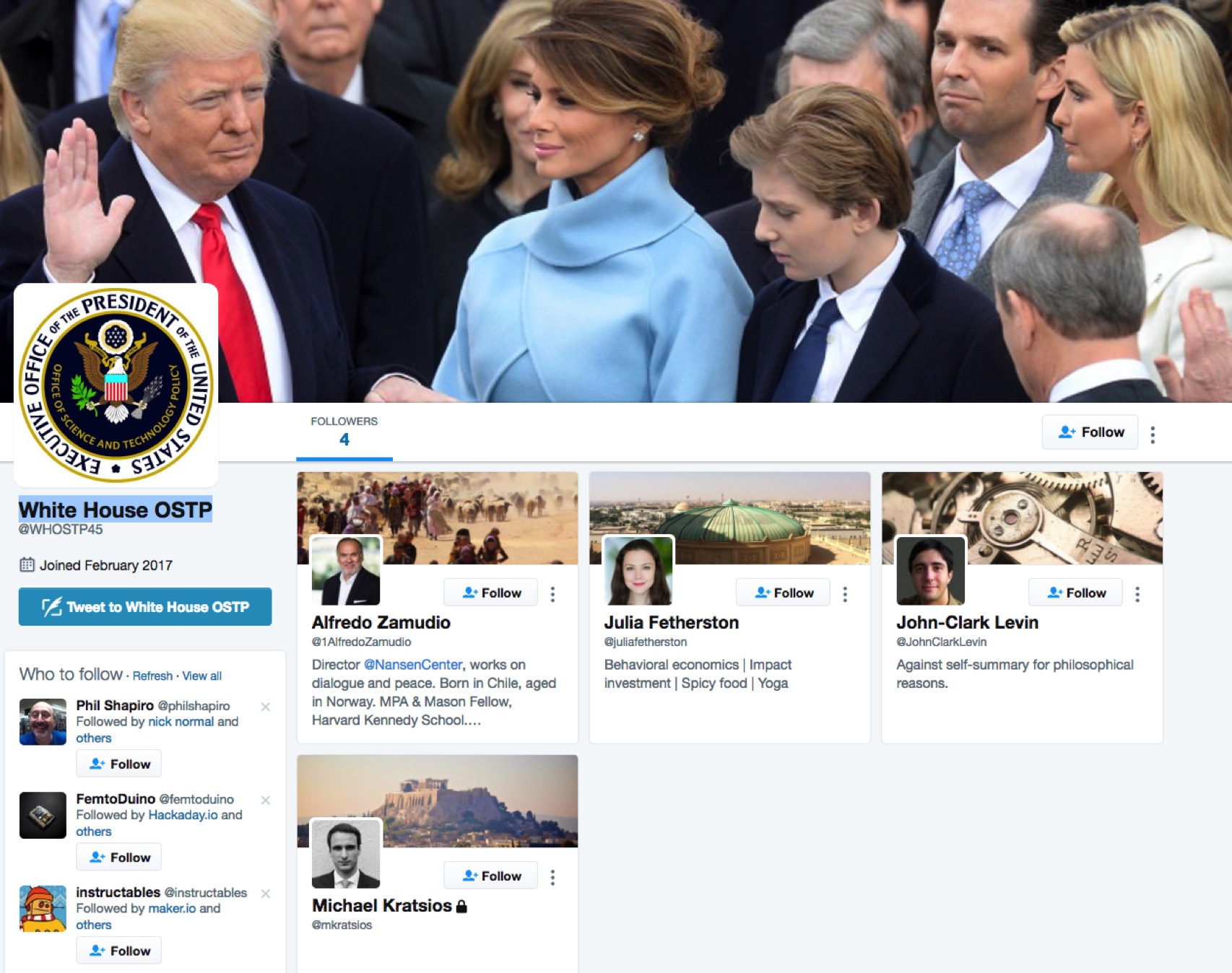 The NEW White House OSTP 45 Twitter account is here, but right now it’s empty and only has 4 followers, Michael is one of them, so that’s good. 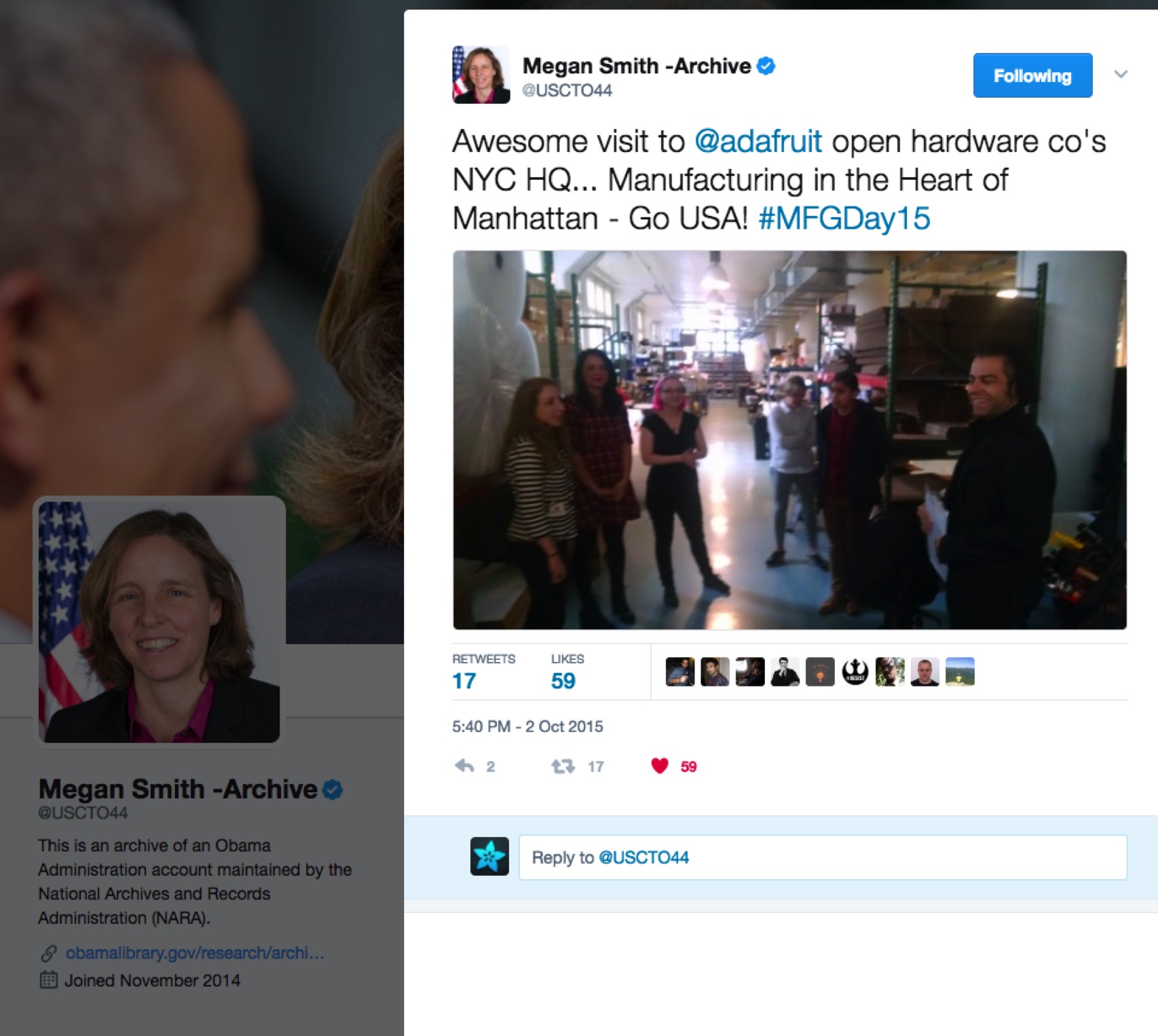 The previous CTO Megan Smith, visited Adaftuit back in 2015 for manufacturing day.