Metaluna Mutant Cosplay Is Out of This World 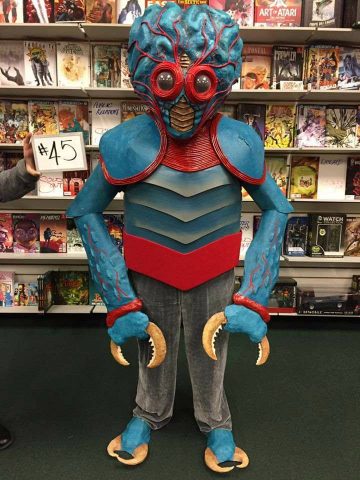 It’s time for another new to me costume, Metaluna Mutant from This Island Earth. The monster appeared in the universal film from 1955 and as a result, also showed up in Mystery Science Theater 3000. Joe Palmisano made the unique, blue costume from more or less everyday items. He told The Replica Prop Forum what he used for the building process:

Paper mache and celluclay head, clear Christmas ball eyes, ethernet cord veins and body trim, cardboard box body, poster board arms and shoulders, paper mache feet, and disco pants. The claws have mechanisms inside. They open and close with a finger trigger system which were made of foam core board and covered in celluclay.

Comments Off on Metaluna Mutant Cosplay Is Out of This World