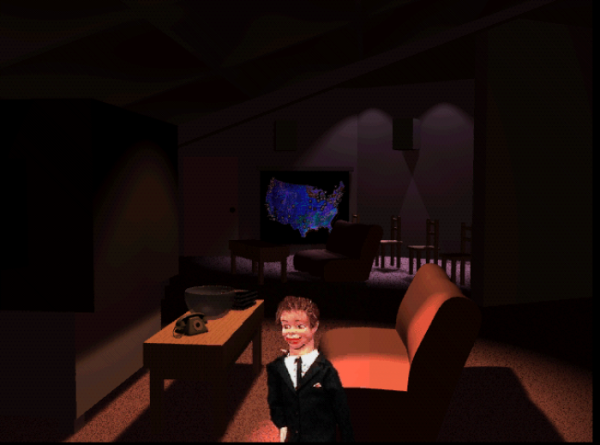 The first sound I ever heard from a CD was that syth riff on the first track of Laurie Anderson‘s Big Science. I wish I remembered the last sound I ever heard on a CD. Anyhow, Laurie Anderson is one of the greatest musicians, artists, and technological innovators in the arts of the 20th Century. And back in the days of “new media” and QuickTime and CD-ROMS she made some seriously trippy multimedia art — via CDM

Puppet Motel, an arts CD ROM by writer, musician, composer, performer, and photographer Laurie Anderson, is an imaginary universe made up of the interplay between light and darkness, mystery and poetry. This universe is populated by puppets and, of course, its creator, the artist herself. Wandering around the visitor is often tempted to put a story together from the successive images displayed on a virtual TV screen in a “black jack manner” or from the objects found in a dim lit room but in the end he must realize that he has been chasing after shadows since the CD ROM does not belong to the tradition of the great narration. These three dimensional virtual spaces are crammed with ghosts and secrets: the visitor is constantly taken by surprise. He is trapped, over and over again, by the virtual setting so he must switch off the computer and start again in order to escape. This platonic vale of tears radiates an enigmatical atmosphere which, all too often, appears manneristic and over-refined.

The reason I single out Laurie Anderson is that her work felt most at ease with the format. Laurie Anderson’s performance style had already by the 90s matured into fragmentary narratives – bits of stories, interwoven, with poetic slices of phrases added sometimes almost decoratively to more linear tales.