Today we celebrate aerospace psychophysiologist Patricia S. Cowings, who received the National Women of Color Leadership Award in 2006. (via NASA) 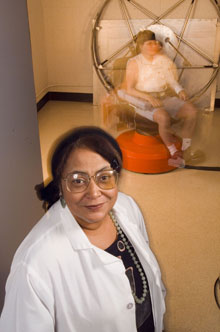 Read her full bio up on Wikipedia.

She did most of her research at NASA Ames Research Center. There she developed and patented a physiological training system called Autogenic-Feedback Training Exercise (AFTE), which enables people to learn voluntary self-control of up to 24 bodily responses in six hours. Her work was first tested in 1985 for (STS 51-b & STS 51c) Spacelab-3 and the first DOD shuttle mission. She tested her AFTE training method also on the Space J-Lab Mission (the first Japanese shuttle mission), with her work focusing on ridding of the astronaut’s motion sickness.[1][3] Later she trained four cosmonauts to control both motion sickness and low blood pressure after six-months in space aboard the MIR space station. She found success, and continued to teach people how to control motion sickness, improve performance of search & rescue pilots, and reduce symptoms of several patient populations suffering from nausea, dizziness and fainting. She has helped author several publications with her husband, William B. Toscano. They have a son, Christopher Michael Cowings Toscano, who traveled with them as they trained space crews.