How Noisy Is Your Neighborhood? Now There’s A Map For That 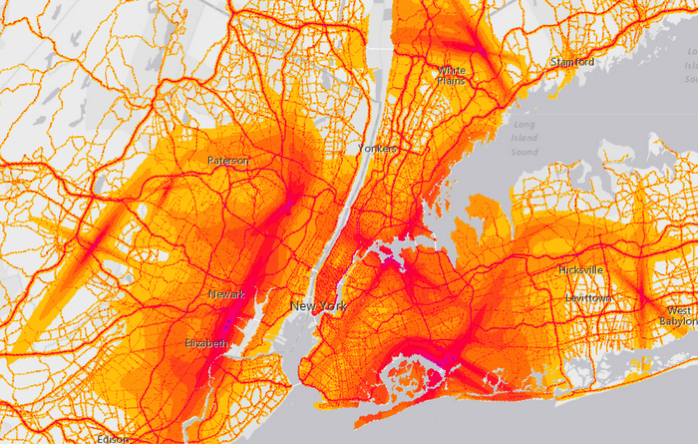 Pictured above, a noise map of New York. Via NPR

There’s no denying it: Los Angeles isn’t exactly gentle on the ears.

That’s one lesson, at least, from a comprehensive noise map created by the U.S. Bureau of Transportation Statistics. On the interactive U.S. map the agency released this week, which depicts data on noise produced primarily by airports and interstate highways, few spots glare with such deep and angry color as the City of Angels.

Blame the area’s handful of major airports and its legendary snarls of traffic — ranked this year as the worst in the nation.

If any Angelenos would like to escape to quieter pastures, though, they’ve got options.

“More than 97 percent of the U.S. population has the potential to be exposed to noise from aviation and Interstate highways at levels below 50 decibels or roughly comparable to the noise level of a humming refrigerator,” the BTS notes in its release.

The agency says it used data compiled by the Federal Aviation Administration and the Federal Highway Administration to draw up its map, also borrowing the tools of both to determine average daily noise levels produced by transportation.

See more and explore your own neighborhood on the U.S. Bureau of Transportations interactive map!

Comments Off on How Noisy Is Your Neighborhood? Now There’s A Map For That