Here’s another great blog by Ken Shirriff about the Intel 8008 microprocessor, which turns 45 next month. This time he takes a look at – physically, just look at that die shot close-up! – the chip’s ALU, segmenting the unit into its various sub-components and then further scrutinizing how it all works. The ‘notes and references’ on the blog post alone are a treasure trove of further reading an analysis of this groundbreaking component! 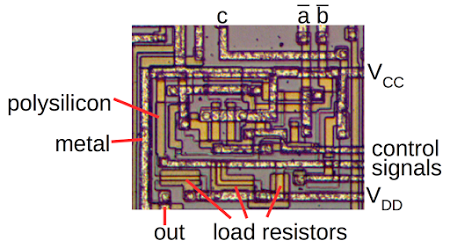 A computer’s arithmetic-logic unit (ALU) is the heart of the processor, performing arithmetic and logic operations on data. If you’ve studied digital logic, you’ve probably learned how to combine simple binary adder circuits to build an ALU. However, the 8008’s ALU uses clever logic circuits that can perform multiple operations efficiently. And unlike most 1970’s microprocessors, the 8008 uses a complex carry-lookahead circuit to increase its performance.

The 8008 was Intel’s first 8-bit microprocessor, introduced 45 years ago.1 While primitive by today’s standards, the 8008 is historically important because it essentially started the microprocessor revolution and is the ancestor of the x86 processor family that you are probably using right now.2 I recently took some die photos of the 8008, which I described earlier. In this article, I reverse-engineer the 8008’s ALU circuits from these die photos and explain how the ALU functions.