Majorie Lee Brown was a prominent mathematician and educator and one of the first black women in the United States to receive a Ph.D in mathematics. 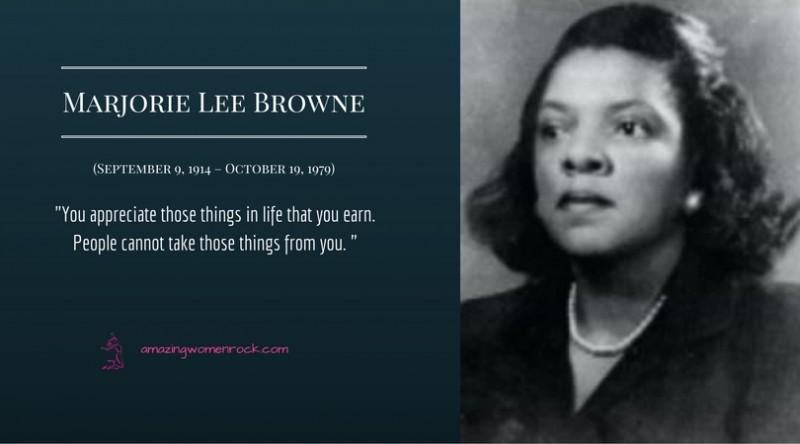 Marjorie Lee Browne was born in Tennessee in 1914. Her mother died when she was only two years old,and she was raised by her stepmother and her father, Lawrence Johnson Lee. Her father, a railway postal clerk, was also a “math wizard” who shared his passion for mathematics with his children. She attended LeMoyne High School, a private Methodist school started after the Civil War to offer education for African Americans. She won the Memphis city women’s tennis singles championship while she was in high school.

She then applied to the University of Michigan graduate program in mathematics. Michigan accepted African Americans, which many US educational institutions did not at the time. After working full-time at the historically black Wiley College in Marshall, Texas, and attending Michigan only during the summer, Browne’s work paid off and she received a teaching fellowship at Michigan, attending full-time and completing her dissertation in 1949. Her dissertation, “Studies of One Parameter Subgroups of Certain Topological and Matrix Groups,” was supervised by George Yuri Rainich. She was one of the first African-American women in the US to earn a doctorate in mathematics, along with Evelyn Boyd Granville, who also earned a Ph.D. in 1949. Euphemia Haynes was the very first African-American woman in the US to earn a doctorate in mathematics, having earned hers in 1943.

After receiving her doctorate, Browne was unable to keep a teaching position at a research institution. As a result of this she worked with secondary school mathematics teachers, instructing them in “modern math.” She focused especially on encouraging math education for minorities and women.

Browne then joined the faculty at North Carolina College (now North Carolina Central University (NCCU)), where she taught and researched for thirty years. She was also the head of the department for much of her time at NCCU, from 1951 to 1970. There she worked a principal investigator, coordinator or the mathematics section, and lecturer for the Summer Institute for Secondary School Science and Mathematics Teachers.

Browne’s work on classical groups demonstrated simple proofs of important topological properties of and relations between classical groups. Her work in general focused on linear and matrix algebra.

Browne saw the importance of computer science early on, writing a $60,000 grant to IBM to bring a computer to NCCU in 1960 — one of the first computers in academic computing, and probably the first at a historically black school.

Throughout her career, Browne worked to help gifted mathematics students, educating them and offering them financial support to pursue higher education. Notable students included Joseph Battle, William Fletcher, Asamoah Nkwanta, and Nathan Simms. She established summer institutes to provide continuing education in mathematics for high school teachers. In 1974 she was awarded the first W. W. Rankin Memorial Award from the North Carolina Council of Teachers of Mathematics for her work with mathematics education.

She was a member of the Women’s Research Society, American Mathematical Society, Mathematical Association of America, and the International Congress of Mathematicians.