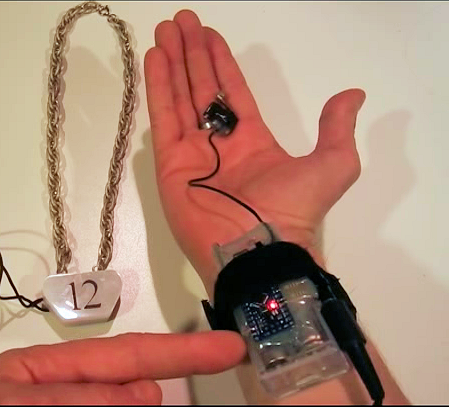 Does this amulet look familiar? Get ready to laugh because it’s a replica prop from one of the zaniest Star Trek episodes ever— “I, Mudd”. Well, technically any episode with Mudd was crazy, but this particular show had androids sporting amulets that would blink erratically in the presence of logic dilemmas. I happened to spot this project on Hackaday and enjoyed discovering exactly why maker Peter Walsh decided to embark on this mission.

When the androids encountered something they didn’t understand, the amulets would blink and beep – indicating that the entire android society was pondering (in unison) what to do. At a con, many people will get the reference and remember what the crew had to do to to defeat the androids. If you wear this amulet at a con, you will get many, many people performing wacky and screwball scenes in an attempt to bewilder the “android”.

Peter’s build includes a laser-cut acrylic stone with LEDs controlled by an Arduino Nano. The control can be strapped around the wrist with the switch concealed under the wearer’s ring. This is a fun con accessory that should create some interesting play, although Peter does admit that it didn’t get him the following he expected at his hometown hackerspace. The question is, who was wearing the necklace? All jokes aside, you should really check out his project, which was an entry into Hackaday’s Sci-Fi Challenge. This is actually one of my fave projects of the year because it’s such a cult piece and really gets the details close to the original TV version. For those of you that are ready for the final frontier of  making jewelry with electronics, check out our learning guide for the Galaxy Pendant. This glimmering necklace is powered with a tiny Trinket microcontroller and the epoxy resin is waterproof, making it a wise choice for cons where you expect beverages to be served. Have fun creating a necklace for your sci-fi adventure.