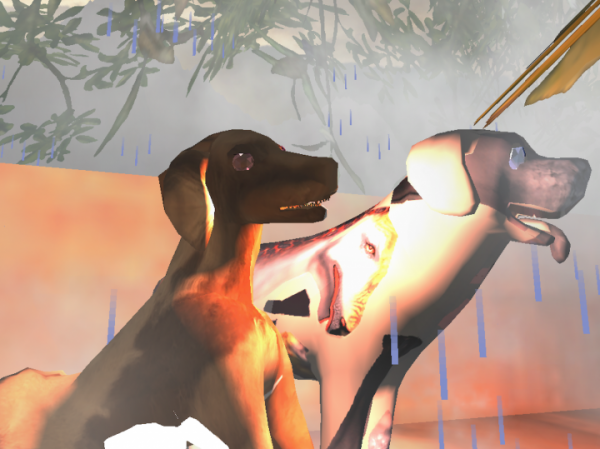 Oiκοςpiel...is the newest project from David Kanaga, a composer and game developer based in Oakland, California. Kanaga is perhaps best known for his sound work on the video games Proteus (2013) and Panoramical (2015). He also runs a game and music theory blog called Wombflash Forest. 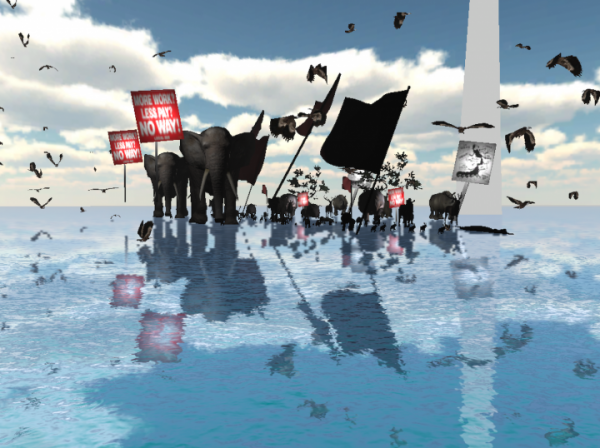 The general premise of Oiκοςpiel is that an immortal Donkey Koch (of the Koch brothers) has commissioned a group of dogs to produce a digital opera for THE GEOSPIEL, a global arts festival scheduled for 2100. A union of other animal employees is attempting to establish universal basic income, but the dog developers won’t join, and eventually serve as strikebreakers. The game more or less follows the opera’s development in a series of acts over several dog generations, with settings that range from a yoga studio in LA (for dogs) to a gated community called Emeryville North, located at the North Pole, where one of the dog protagonists pursues an artist residency.

This note about firsts is important, as Kanaga’s newness to development tools seems to directly influence the content of the game. Oiκοςpiel is an asset store, exploded. Rather than build each element by hand, Kanaga has almost entirely used prefabricated components, including camera movement, animal models, crystal-shaders, and transition effects, each purchased for a small sum and sewn together with a deft hand. In interviews, Kanaga has said that these scripts and models are what made it possible for him to put Oikospiel together on his own, but the asset store aesthetic is also immediately, unassailably political.