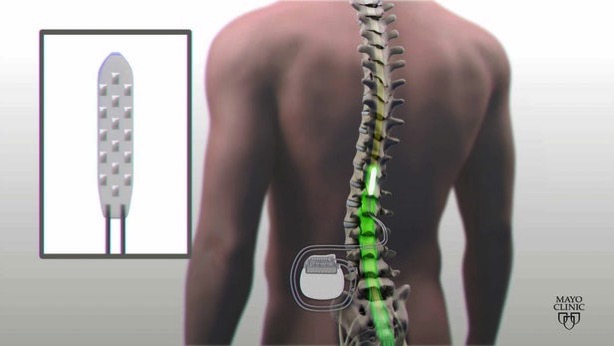 An innovative combination of electrical spinal stimulation and physical therapy has allowed 26-year-old Jered Chinnock to intentionally move his legs for the first time in three years, after an accident left him paralyzed.

Researchers at the Mayo Clinic, in collaboration with a team from UCLA, set out to expand on previous work done at the University of Louisville that established a process by which electrical currents directed into the spine could be used to regain control of paralyzed limbs.

Jered Chinnock had an accident three years earlier that injured his back at the sixth thoracic vertebrae. Although researchers initially diagnosed him with a motor complete spinal cord injury it was suspected that dormant connections across his injury, meaning his condition could be reclassified as discomplete.

The Mayo Clinic study started with Chinnock undertaking 22 weeks of intensive physical therapy to prepare his muscles for the spinal cord stimulation. He then had an electrode implanted just below his injury area near the spinal cord.

Once the electrical stimulation was activated, after three weeks of recovery from the surgery, Chiddock quickly showed exciting responses. While lying on his side he was able to intentionally move his legs and make step-like motions. He also was able to stand independently while keeping balance by holding support bars.

The technique the researchers are developing is a novel process designed to reengage the spinal cord’s local nerve network instead of using electrical stimulation to directly activate muscles.

“We’re not activating the muscle itself, but we are trying to neuromodulate the spinal cord so that the patients can decide whether they want to move their legs or not,” Dr Kendall Lee from the Mayo Clinic explained.

“It was almost mind-blowing. Right away I was able to move my toes, something I haven’t seen in a while,” Chinnock said.