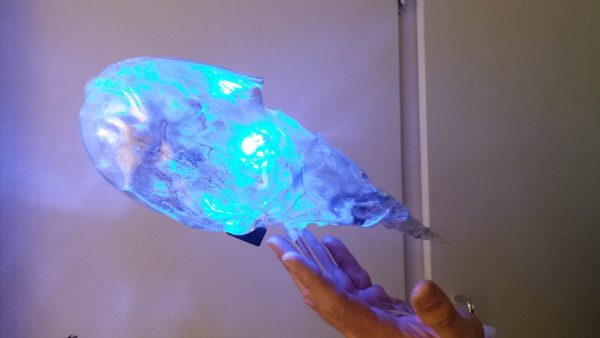 Ki blasts, or spirit blasts, show up in the Dragon Ball universe — especially the Kamehameha. Characters discharge these blasts, and they look like glowing balls of light. Redditor Kyengen is working on creating a prop version of one, and it would be an excellent accessory for a Goku or other Dragon Ball costume. This is only a prototype, but it already looks impressive. He explained how he made the LED enhanced blast:

The basic shape was made by just heating and twisting petg sheets until it reached a form I kind of wanted. The front part was made by draping the heated plastic over a snow globe, the rest was done by hand and cursing as I was grabbing heated plastic and I’m dumb. The stick is an acrylic rod attached with a dab of hot glue then heated to bend into a shape that follows the hand a little. The end of the rod was cut to be slightly flat with a dremel, so it could fit into the 3d printed wrist holder without moving around too much. The wrist holder in this image is too small, but you can’t really see that, I need to tweak it some for better stability. One little bonus trick I used is that the plastic sheet was coated with a light layer of mirror reflective paint. It gives it a grayish sheen without the light, but creates an internal reflective effect to give it a greater “glow” effect rather than just be lit up.

Comments Off on Light Up Dragon Ball Ki Blast Prop