NASA’s ISS (International Space Station) orbits approximately every 90 min., but most people have no idea it’s right above their heads. That’s why making an ISS pin was the perfect idea for my latest project. Actually the idea came when I first competed in the NASA Space Apps Challenge with my friend Brooks Zurn Rampersad four years ago. Of course back then we envisioned the Orbit Skirt, and since finding connectivity in a small package was tricky, the best we could do was represent an orbit around the bottom of a skirt with LED sequins and a Lilypad Arduino. One of the judges that was wowed was Derrick Pitts, Chief Astronomer of the Franklin Institute in Philadelphia. He wanted to know when there would be a unisex version. The skirt ended up being one of the most unusual entries that year in Philadelphia garnering third place, and I’ve heard NASA is still telling the story. 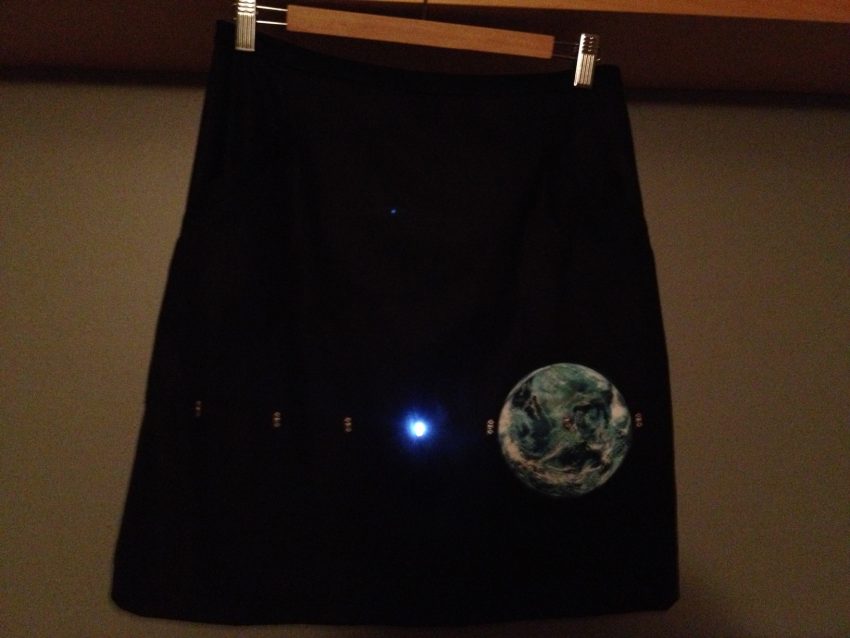 Luckily nowadays there are plenty of small microcontrollers available with connectivity, and I ended up choosing the Particle Photon which has WiFi capability. The microcontroller pairs well with Adafruit’s Particle/Spark NeoPixel Ring Kit, making the perfect shape for blinky orbits. The addition of an inexpensive plastic photo button allows for a NASA image of planet Earth, so no 3D printer is needed. The code ties in with the Space channel on IFTTT (If This Then That), a program that allows you to connect IoT devices easily through clickable applets. So, when the pin is in idle it shows a simple white blip representing the ISS, but on an actual flyby the LEDs do rings of blue, white and red, as well as multi-color. Of course there is no guarantee you will see the ISS because all sorts of light and weather conditions can interfere. Also, IFTTT mentions that there could be an hour delay. However, you will soon get a feel for just how frequently the ISS passes over your exact GPS destination, which is truly exciting if you are a space geek like me. So, I hope you NASA lovers will give this ISS Pin a try. I’m sending shout-outs to my classmates at NASA Datanauts, my NASA Space Apps Challenge friends who will be competing at the end of the month, and most of all to Brooks for going where no woman has gone before with orbits—ISS 4ever!!! Oh yeah, and if any of you end up making this project, please do ping me and I’ll make you famous on Jupiter or at least Planet Ada.