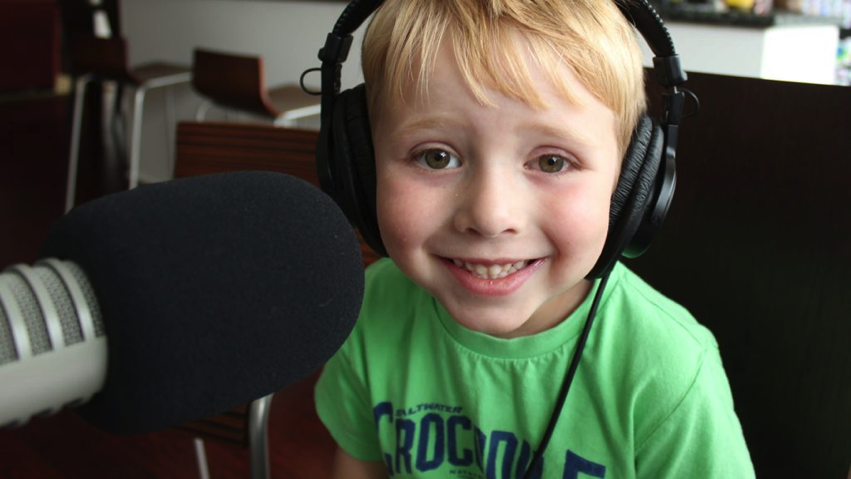 On his podcast, Nate Butkus has talked radiation with a US government scientist, evolution with a Harvard researcher, and, most recently, genome-editing with MIT’s Kevin Esvelt. But ask him his favorite moment from the 28 episodes so far, and it has to be when he belched during a taping.

So it goes when the podcast host is 6 years old.

With help from his producer (his dad, Eric Butkus), Nate has parlayed what he says has been his passion for science since birth into a podcast downloaded about 4,000 times each episode and even an appearance on Ellen DeGeneres’s show.

The show was born in 2015 when Nate, then 5, told his dad he wanted to start a podcast.

Eric Butkus works in multimedia at the Journal of the American Medical Association, and the Butkuses, who live outside Chicago, had played around with the recording equipment there. (As Eric explained the history of the show in a recent phone call, Nate interrupted with an important update: “By the way, I just got a new fish!”) Eric, a former recording engineer, also had equipment stored away in the closet, so when the show began, he set it up for them in the attic.

Nate’s first guest was his mom (“He said, ‘Who do you want to call?’ and I said, ‘My mom!’” explained Nate, who is an only child) and then he had some family friends on. But since then, he’s spoken with scientists such as Yale ecologist Adam Rosenblatt, University of Michigan biologist Monica Dus, and Harvard Medical School geneticist Clifford Tabin. (“He has a PhD and everything,” Nate said as he introduced Tabin on the show.)

Most of the time, Nate picks a topic and Eric finds a guest, generally a scientist or author. But for one episode, they were contacted to see if they would talk with Huban Gowadia, then the director of the Domestic Nuclear Detection Office. Nate’s response: “Who says no to the government?”

Comments Off on A 6-year-old’s science podcast: devoted listeners, top researchers, and the occasional burp