The unsung women of Star Wars: buns, a dead Obi-Wan and the script doctor #SciFiSunday 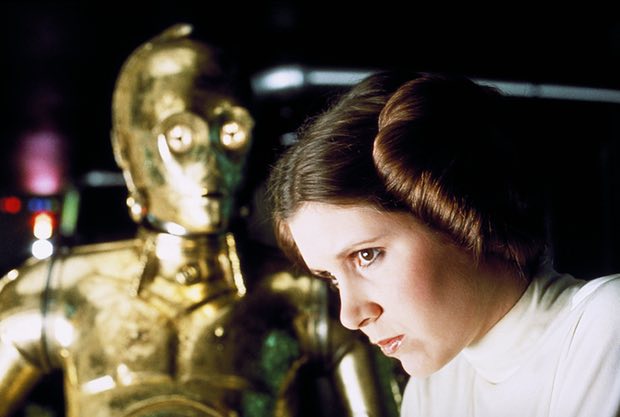 The Guardian highlights some of the awesome women who helped create Star Wars.

t’s a man’s world,and showbusiness is a man’s meal,” Carrie Fisher once wrote, “with women generously sprinkled through it like overqualified spice.” It certainly was a man’s galaxy. George Lucas’s first Star Wars film, which turns 40 on 25 May after being retitled A New Hope in 1983, features just two women characters with speaking parts: Aunt Beru and Princess Leia Organa. Behind the camera, female faces were just as scarce. When 19-year-old Fisher turned up for her first day on set at Elstree Studios in 1976, she noticed only three other women. “The crew was mostly men. That’s how it was and that’s how it pretty much still is.” Though few and far between, the unsung women of Star Wars would play a crucial role in the creation of Lucas’s blockbuster franchise while flying under the radar.

The woman who gave Leia her attitude
Lucas’s script proved a problem for everyone. Carrie Fisher, for one, struggled with her lines. “‘I thought I recognised your foul stench when I arrived on board.’ Who talks like that,” she asked, “except maybe a pirate in the 17th century?” Fisher wasn’t the only cast member to complain. Harrison Ford famously told Lucas: “George, you can type this shit, but you sure can’t say it,” while Alec Guinness called the dialogue “lamentable”. Lucas asked his American Graffiti co-writers Gloria Katz and Willard Huyck to secretly polish the script.

Comments Off on The unsung women of Star Wars: buns, a dead Obi-Wan and the script doctor #SciFiSunday