Which Websites From 1995 Are Still Online? 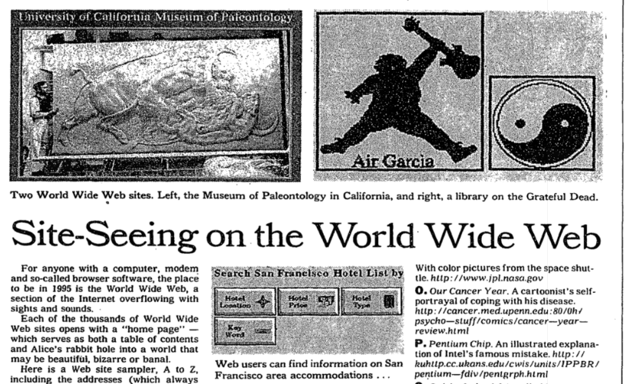 The Atlantic recently went in search of sites that have survived from the early 1990s. They use a 1995 guide to “Site-Seeing on the World Wide Web” from the NY Times (which didn’t even have its own site at that point!) to navigate the forgotten terrain. While their method is one part nostalgic, one part a call-back to Guy Debord’s concept of the dérive, The Atlantic definitely uncovered a zany gem or two.

Today there are more than 1 billion sites on the web. But in 1995, the year AltaVista and Amazon launched, there were 23,500. (The year before that, there were only 2,738 websites, according to Internet Live Stats, a site that tracks web trends.) “For anyone with a computer, modem and so-called browser software, the place to be in 1995 is the World Wide Web, a section of the Internet overflowing with sights and sounds,” the Times wrote in its 1995 “site-seeing” guide.

The first site it recommended was “everyone’s favorite plastic oracle, on line,” a place where you could consult a Magic 8-Ball. It’s funny now: The tenor of the early web, with its gimmicks and sense of play, was eventually repeated in the early app environment. Remember when having an iPhone meant demonstrating a smattering of silly apps—things like Magic 8-Balls, virtual lighters, and digital beer that disappeared when you tilted the device?