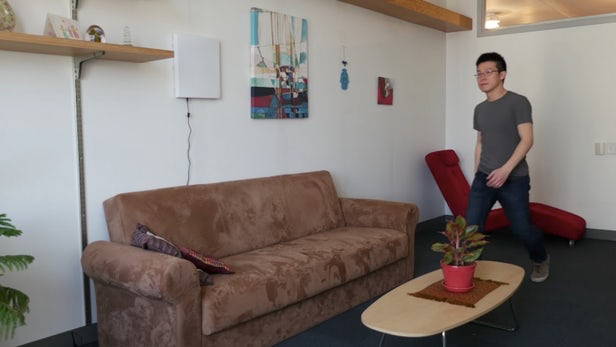 Scientists are increasingly looking at predicting health issues such as cognitive decline, cardiac disease, pulmonary disease or future falls via decreases in the patient’s walking speed. And while there are already methods of measuring that speed, some of them can be obtrusive, or don’t provide a true picture of the manner in which the patient typically walks. With that in mind, a team from MIT’s Computer Science and Artificial Intelligence Laboratory (CSAIL) has developed a no-contact system that measures a person’s true walking speed wirelessly.

Currently, the main method of measuring walking speed (aka gait velocity) involves timing the patient with a stopwatch. This causes them to be very aware of the fact that they’re being tested, however, and may result in them walking faster or slower than they would normally.

Devices such as fitness trackers or GPS-enabled smartphones don’t provide very accurate readings, plus the latter won’t work indoors. Another approach is to place a depth-sensing camera in the patient’s home and then analyze footage of them walking, although many patients may find that to be an invasion of their privacy.

That’s where the new “WiGait” system comes in.

Designed by a team led by Prof. Dina Katabi, it’s an extension of technology that was previously developed for MIT’s WiTrack system. It incorporates a flat device that hangs on a wall in the patient’s home, emitting radio signals that contain about one-hundredth the amount of radiation of a standard cellphone.

As the patient walks around their home – even if they’re in another room – the system notes the precise times and locations at which their body reflects back the signals that are sent out. By analyzing that data, it is able to determine their walking speed (and any changes in it) with a claimed accuracy of 95 to 99 percent. It’s also 85 to 99 percent accurate at measuring their stride length, which is known to decrease due to conditions such as Parkinson’s disease.