How to Help an Injured Parrot With Tech #WearableWednesday #wearabletech #3Dprinting 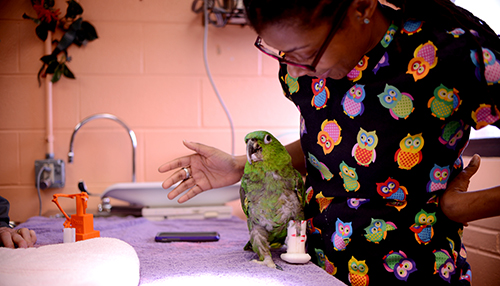 This story comes from Penn Vet, a hospital I’ve used a few times here in Philadelphia for emergencies with my own pets. This adorable parrot named Pete was startled by a fox while climbing on his outside aviary and unfortunately lost a foot to the furry creature. I’ll spare you the photos showing the damage, but one interesting fact is that parrots reproduce red blood cells faster than humans, which is one of the reasons this story has a happy ending. The couple that owns Pete had problems finding an emergency animal hospital capable of dealing with exotic companions in their area and had to drive over an hour to get him to Penn’s Ryan Hospital. Luckily the bird was well received by Dr. La’Toya Latney, Service Head and Attending Clinician. Pete received great care, but unfortunately the injury left him with a stub for his left leg, which was a concern.

Typically, birds that weigh less than 100 grams tend to do well with one leg. Once that weight threshold is exceeded, though, birds often experience pain and arthritis in the remaining leg due to the additional weight burden.

A 3D printed prosthetic was needed, and luckily Dr. Latney knew someone with experience—Dr. Jonathan Wood, Staff Veterinarian in Neurology and Neurosurgery. Initial designs closely resembled the parrot’s foot, but they tended to crack as they weren’t able to withstand the weight. So, Dr. Wood teamed up with 3D loving student Gregory Kaiman, as well as Penn’s Biomedical Library 3D printing group. What resulted were more sturdy designs, which look a lot like tripod legs for cameras. 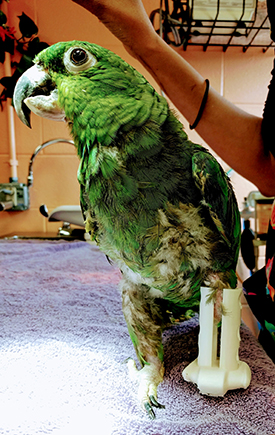 Pete is doing much better, but the team continues to work on improving his prosthetic as it is having problems staying attached. Certainly comfort is a factor.

One option they are exploring is a flight vest to keep the prosthetic secure on Pete’s leg. Since Pete tolerated the padding for his chest wound, the team is confident that he will adjust to an attachment system that goes under and around his wings. Another idea is to create a boot that is half solid and half soft. The top half would have a sock-like rim that would compress around Pete’s leg, securing it in place.

This is probably the most interesting puzzle for 3D printing I’ve seen in a while and I’m so excited to learn that it is happening in Philadelphia. Hopefully I can get a follow-up story as Pete progresses. Of course Pete represents so many other people and animals without limbs; hopefully in time open source 3D printing will make prosthetics more affordable for all. Believe it or not, our own 3D printing superstars, the Ruiz brothers, actually put a learning guide together for printing prosthetics for dolls. So often children do not see representations of themselves, so this is one small way that you can make children happy. Little things mean a lot.